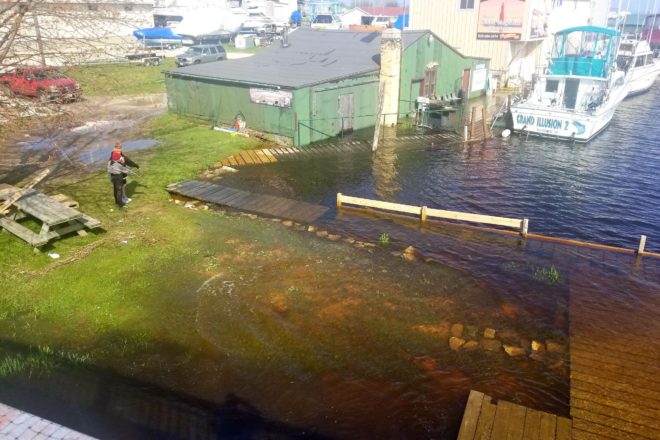 A view from the Second Street bridge at Algoma, looking northeast at some of the flooded docks on the Ahnapee River. Photo by Kevin Naze.

If you’re age 33 or younger, you’ve never seen Green Bay and Lake Michigan water levels higher than they were last weekend. And – depending on what the U.S. Army Corps of Engineers finds this week – there’s a chance that we could be looking at an all-time record as we head into June.

Frequent spring rains and near-record lake levels have had the Kewaunee City boat launch flooded by the Kewaunee River for weeks now – something locals say they’ve never seen for such an extended period.

At Algoma, the Ahnapee River hasn’t dropped much from its spring snowmelt stage, forcing adjustments in dockage as charter and private anglers prepare for the busy summer salmon- and trout-fishing season.

Shoreline erosion all along the Kewaunee/Door County Peninsula is a huge concern.

Lake Michigan water levels were last this high in 1998 and 1999, when they fell just shy of the all-time mark set in 1986. From 1999 to 2013, below-average precipitation and warmer temperatures that boosted evaporation led to a huge swing.

At that time, Lake Michigan was 29 inches below its long-term average and had declined 17 inches in just 13 months. It was the end of a 14-year stretch of below-average water levels, the longest since record-keeping began in 1918.

Some citizens blamed Chicago and other large cities for taking out too much water. Others said dredging of the navigational channel in the St. Clair River on the south end of Lake Huron was responsible, accelerating the flow of water out of the Upper Great Lakes.

But in the end, weather seems to be the key. Above-average precipitation in the Lake Superior and Lake Michigan basins has played the largest role. Additionally, Lake Superior has been mostly ice-covered during three of the past six winters, reducing evaporation.

Lake Michigan has recovered nearly five feet of water during the past six years, and last Friday, the Corps of Engineers reported that the lake was just two inches shy of the all-time May record. Water levels were 11 inches higher than last year, and 29 inches above the 100-year average.

Although shoreline damage is a major concern, there have been some benefits to wetlands and groundwater, as well as improved access to spawning areas for fish such as northern pike, which utilize ditches and small creeks.

There’s also been no need for costly dredging in most harbors. The City of Algoma was spending tens of thousands of dollars in the low-water years to make sure boats wouldn’t strike bottom at the mouth of its public marina.

Last call for elk tag
If you’re reading this column “hot off the press,” you still have time to submit an application for Wisconsin’s second licensed elk hunt this fall, but you’ll need to hurry.

The deadline is 11:59 p.m. Friday, May 31. The fastest ways to apply are online at GoWild.wi.gov using your DNR customer ID or at any licensing agent. The fee is $10.

Dan Vandertie of Brussels was one of the lucky few to draw last year. The story of his successful hunt on a 6×6 bull – the first legal elk taken in the inaugural managed hunt – can be read with a Google search. My favorite tale is in the Country Today newspaper.

Donate to park fishing pier
Five years ago, Potawatomi State Park’s accessible fishing pier was damaged by waves and removed from the water. A grassroots and DNR effort to raise funds for a new, improved pier is nearing completion, but there’s still time to donate.

Comment on stocking plan
Lake Michigan salmon and trout anglers can view the presentations from a recent public meeting on a three-year stocking plan on the DNR website. Comments are open through the end of June. Another meeting will be held in late summer, followed by another public comment period and a final decision in the fall.