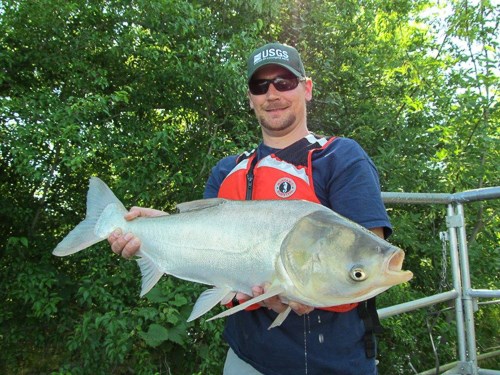 Study finds the invasive fish could thrive on mussel detritus

A new study by University of Michigan researchers has found that the flexible eating habits of Asian carp – particularly bighead and silver carp – would allow the voracious invasive species to easily establish itself in Lake Michigan.

Previous studies had suggested that Lake Michigan does not have enough algae and other types of plankton to sustain bighead and silver carp, which can eat up to 40 percent of their body weight in food each day.

The study, reported in the most recent issue of the journal Freshwater Biology, found that, consistent with previous studies, the highest-quality carp habitats are near river mouths and in eutrophic areas of Green Bay.

Unlike previous studies, this one took into account the plasticity of the bighead carp diet. Although offshore areas remain unsuitable as feeding grounds for silver carp, this is not the case with the bighead variety, the report found.

“Overall, our study demonstrates that bighead carp are capable of surviving and growing in much larger areas of Lake Michigan than predicted by previous studies, and thus suggests that the risk of establishment is not sufficiently reduced by low plankton concentrations,” the report stated. “More broadly, this research demonstrates how the physiology and trophic ecology of bighead carp contributes to their high invasive capacity and can permit their survival in novel environments.”

Lead author Peter Alsip told the Peninsula Pulse that the study surprised a lot of people, except for those in the central part of the country who work with these invasive fish regularly.

“It validated what they always thought was true: These are hardy and pretty resilient fish,” he said.

Before this study, the prevailing thought was that because these two species of Asian carp are plankton eaters – and plankton have undergone a major decline in Lake Michigan during the last 50 years due to a strategic reduction through nutrient-management practices and the introduction of the invasive zebra and quagga mussels, which also consume plankton – Lake Michigan would be a poor habitat for the carp.

Alsip said some describe Lake Michigan as a “plankton desert.”

“That has generated skepticism of whether a large, invasive fish like bighead or silver carp that depend on plankton would be able to survive in the lake,” he said.

But that view, as this study proves, failed to take into account the adaptability of the carp.

“We’re not the first to look at this,” Alsip said. “We built on previous models that have conducted habitat-feasibility assessment in Lake Michigan and elsewhere. There’s a 2017 study that looked at food abundance at the surface and the top meter of the water, and looked at one or two types of food. They found an abundance of food in the near-shore area and in Green Bay. That alone, with the fact that these fish can travel long distances – and fast for a long time – was alarming.”

This study considered the idea that bighead carp can feed at different depths in the lake. Researchers also looked at less nutritious food sources for the carp, such as mussel detritus in the form of mussel feces and partially digested material that the mussels spit out.

Studying the carp for the past two years, Alsip said the researchers made some alarming findings.

“They can survive with little to nothing in their stomachs and can manage their weight loss by feeding on different types of food when plankton isn’t available,” he said. “Sometimes they will eat a majority of detritus: nonliving organic material. Sometimes there’s bacteria in there that provides extra energy. These fish really can adapt to new environments with flexible feeding behavior that will allow them to survive in environments like Lake Michigan, which are harsher than they are used to.”

Alsip said a follow-up study will look at different scenarios and the effects of meteorology on carp survivability in Lake Michigan, “inferring how climate change could affect the vulnerability of Lake Michigan to these fish.”