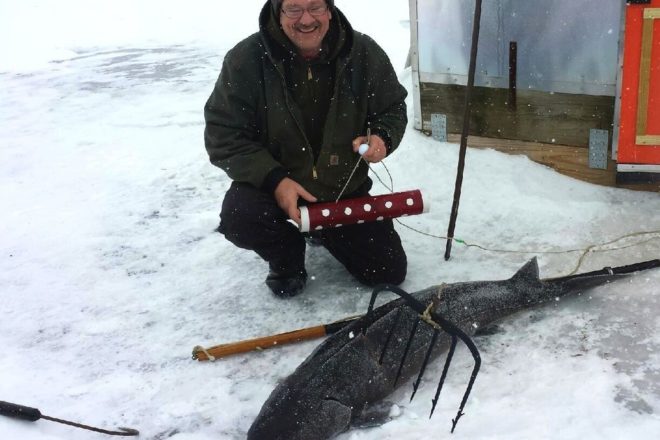 Chuck Wagner of Kewaunee County is one of the many locals who travels to Lake Winnebago each winter for its unusual sturgeon-spearing season. Proving that you don’t need a fancy decoy to attract fish, Wagner used a painted piece of PVC pipe to lure this sturgeon close. — Special to the Pulse

A return to colder air in the middle of next week may be too little, too late to help opening-day sturgeon spearers on Lake Winnebago. The annual season – a tradition not unlike deer hunting in its popularity among its passionate devotees – is set to open Feb. 8 on the state’s largest inland lake and its upriver lake chain.

As of late January, ice thickness was in the six-to-eight-inch range in some areas, but just two to four inches in others. If things don’t improve significantly, many spearers won’t be able to access their favorite spots. Even worse, prolonged thaws prior to the opener result in murky water conditions, which limits looks. Visibility was seven to eight feet this week, and many spearers position shacks over water at least twice that deep.

More than 12,000 people from all 72 Wisconsin counties and 34 states purchased licenses for a long-shot chance at spearing a fish on ’Bago this season, and 500 others (out of a record 8,113 applicants) drew a permit for better odds on the upriver lakes.

Even during a good year, spearing success on Lake Winnebago is only about 10 to 15 percent. During a year with murky water, fewer than one in 20 score. Water clarity is not as much of a factor on the upriver lakes, which are much shallower. Success rates there often run between 60 and 70 percent before harvest caps are reached.

DNR sturgeon biologist Ryan Koenigs said the latest models estimate that there are about 19,000 adult females (age 20-plus) and 24,000 adult males (age 15-plus) in the system. Only 479 sturgeon were speared last year, when water clarity was also poor.

Closer to home, some nice perch, pike and whitefish are being caught on Green Bay waters, but it’s still not safe for offshore exploration in all areas. As always, check locally for the latest advice.

There’s never been a shortage of ideas about what would make the best deer hunting season structure in Wisconsin, but one of the more controversial ideas involves hunters being allowed just one buck per year.

Some suggest that hunters should get only one buck tag per year, and they can then choose to use it during the bow, crossbow or firearm season. The idea is that it would allow more bucks to mature while getting more hunters to target antlerless deer.

In reality, I believe it would backfire.

Very few hunters shoot more than one buck a year as it is. In fact, only about one in five or six hunters fills a buck tag most years. Even though the majority won’t tag any buck – let alone a giant like those gracing the covers of deer-hunting magazines – it’s the dream of a chance at a trophy buck that gets a lot of hunters out there.

For the tens of thousands who shoot a buck with bow or crossbow, what incentive would there be to buy a gun deer hunting license? And if they’re not out there, they won’t be shooting does, either.

Krueger was hired in 1998 and served as a field warden in Oconto and Columbia counties before being promoted to lieutenant and warden supervisor of the Park Falls team based in northern Lincoln County a decade later.

In 2012, Krueger was promoted to captain of the South Central Region and moved to Dane County. He was recently sworn in to succeed Todd Schaller, who retired from the top spot after more than 30 years of public service.

If you’re a birding enthusiast, you need to check out ebird.org. It’s easy to use, and the Wisconsin section includes links to the latest sightings of interest. There’s value from a scientific standpoint, too: eBird was used to compile data from more than 125,000 checklists submitted by more than 2,100 participants for the recent, five-year Wisconsin Breeding Bird Atlas II effort.

As of Jan. 24, Lake Michigan was 39 inches above its 100-year monthly average, 20 inches higher than last year and five inches above the record set in 1987. Water levels were up 68 inches from the record monthly low, set in 2013.

Ski and Hike by Candlelight