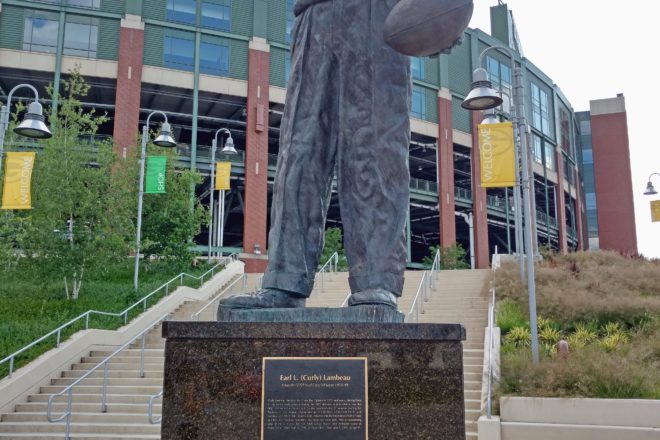 Founder, player and coach of the Green Bay Packers Earl (Curly) Lambeau, finished his NFL coaching career with Washington from 1952-53 after 31 seasons with the Packers. Photo by Justin Skiba.

The Green Bay Packers opened up their pre-season with a 24-9 victory against the Philadelphia Eagles at Lambeau Field. The Packers now prepare to head to the nation’s capital to visit Washington.

Green Bay and Washington are two of the oldest NFL franchises. Their first meeting took place in November 1932, when the Washington franchise was known as the Boston Braves, before moving to Washington in 1937.

Curly Lambeau, the founder, player and coach of the Green Bay Packers, departed from the organization after 31 years. While he coached the Chicago Cardinals from 1950-1951, he also ended his coaching career in Washington from 1952-1953.

The two men are honored with 14-foot tall bronze statues in front of the Lambeau Field Atrium, facing Lombardi Avenue.

Lambeau, who was 15 years older than Lombardi, finished his coaching career one season before Lombardi began coaching in the NFL. Lombardi served as an assistant coach for the New York Giants from 1954-1958 before becoming the fifth head coach in Green Bay history.

Lambeau’s final two coaching seasons in Washington did not mirror the success that he had in Green Bay, where he amassed 209 wins as coach. His 1952 campaign ended with a record of 4-8. Despite coaching the team to their first winning season in five years in 1953, going 6-5-1, Lambeau was relieved of his coaching duties after a disagreement with owner George Preston Marshall, marking the end of his NFL career.

Fourteen years later, Lombardi resigned as head coach of the Packers after the team’s Super Bowl II victory at the conclusion of the 1967 season. He stayed on for one season as general manager, before accepting the head coach position in Washington in 1969.

Lombardi brought stability to a floundering franchise, finishing his lone season in Washington with a 7-5-2 record, its first winning season in 14 years. But the Lombardi era in Washington ended abruptly when he died of cancer in September 1970 at the age of 57.

Lambeau and Lombardi were certainly not the only longtime Packers to end their careers with other organizations. Hall of Famer Brett Favre finished his career with the Jets and Vikings after spending 16 seasons in Green Bay. Reggie White played one final season with the Carolina Panthers in 2000 after leaving Green Bay.

Herb Adderley and Forrest Gregg played a combined 24 seasons for the Packers before both finishing their careers with the Dallas Cowboys in the early 1970s. So, too, did running backs, Jim Taylor and Paul Hornung, both of whom went to the New Orleans Saints in 1967 after spending much of the late 1950s and 1960s in Green Bay (though Hornung never played a game for the Saints, retiring in the preseason).

The NFL, both past and present, continuously reminds us that it is a business, indeed. Fans know it. Lambeau and Lombardi both knew it. While moving on is inevitable, it is also a reminder that the legacies of these men are not defined by where they ended up, but by the journey that brought them there.