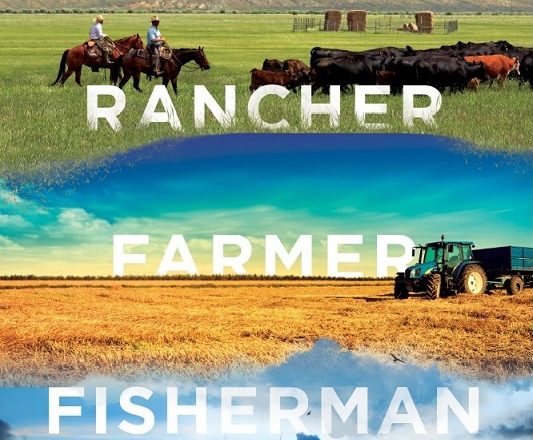 The Door County Land Trust will host a screening of the documentary film Rancher, Farmer, Fisherman at Crossroads at Big Creek, Sturgeon Bay, on Oct. 4 at 7 pm. Rancher, Farmer, Fisherman tells the inspiring story of heartland heroes who are feeding the world while stewarding the land and water. Viewers will find striking similarities in these stories to those of Door County’s working farms and fleets.

Based on the book by best-selling author Miriam Horn of Environmental Defense Fund, Rancher, Farmer, Fisherman was directed by Oscar nominee and Emmy winner Susan Froemke and Emmy winner John Hoffman, and narrated by award-winning journalist Tom Brokaw. The film premiered to great acclaim at the Sundance Film Festival.

The film is a tribute to people like Justin Knopf, a fifth-generation Kansas farmer revolutionizing industrial scale agriculture to rebuild the fertility, biodiversity and resilience of his soils and protect downstream waters from pollution. Knopf is making long-term investments to ensure the next generations of farmers will inherit fertile, productive lands. By taking action, these individuals have made enduring contributions that help preserve the landscapes that define the American character.

The Hollywood Reporter calls the film, “the rare non-partisan conservation doc that puts aside politics to challenge the conventional view of responsible environmental practices.”

Following the 90-minute film, Door County Land Trust staff will invite questions and discussion from the audience. The event is free and open to the public. For more information visit DoorCountyLandTrust.org.