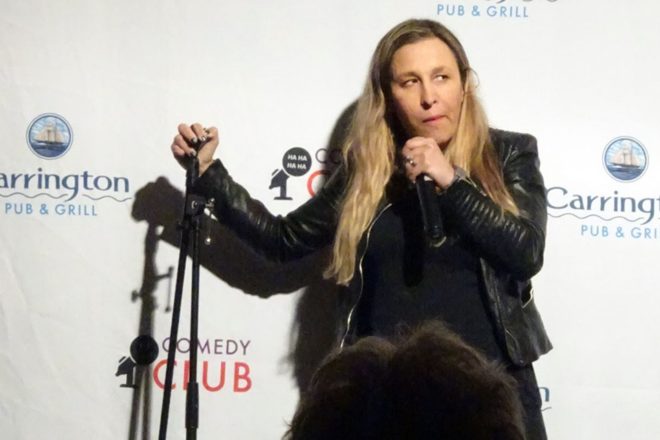 The peninsula is rife with artistic talent, from classical musicians to sculptors and painters to professional actors. Yet in the live-comedy category, there’s relatively little to be found. Comedy perhaps isn’t as broad of a draw as the performers who book through the bigger performance venues, but it’s something I’ve missed since leaving Madison, where I could reliably find excellent acts on a weekly basis.

Fortunately, I heard about the comedy series at the Landmark Resort’s Carrington Pub that’s starting up for the off-season. One night a month, October through May, a dining room at the Landmark morphs into a comedy club – complete with a performance stage – to host a dinner and stand-up comedy performances by two visiting comedians. Eager for some live comedy, I made plans to attend the first night of the new season on Oct. 17.

The comedy series has been presented annually for 15 years as a way to diversify the county’s off-season entertainment offerings. The Landmark Resort is Door County’s largest resort, with 294 suites, an on-site restaurant and a wide variety of meeting rooms and amenities. It’s situated just south of downtown Egg Harbor on 40 wooded acres and is open to local and visiting guests and diners year-round.

The Landmark works through a booking agent to bring in visiting comedians, who are often from the Milwaukee, Twin Cities and Green Bay areas or who have a connection to the county. Each year the series welcomes back a handful of comedians who enjoying returning, even though they reside across the country. The comedian who opened the night I attended lives in Los Angeles but had vacationed at the Landmark growing up.

Guests may also make reservations just for comedy show and order drinks from the bar. The comedy club’s room has two levels, with a mixture of tables that allow all guests to sit comfortably at their tables and have a view of the comedians. The room seats about 80, and if the show fills far enough in advance or will be hosting a larger group of visitors, the event moves to a larger banquet space.

On Oct. 17, the show did sell out for the featured comedians: Lindsay Glazer, also known as #AlphaB*tch, who balances being a mother of two (if you count her husband) with careers as a criminal defense attorney and stand-up comedian; and headliner Patrick Garrity, who’s currently on his “never-ending tour,” which means that he is literally always on tour and has no home base.

Glazer took the stage around 8 pm and offered a conversational style of comedy, roping the crowd into her act. As an attorney and expert witness, her humor had an edge of sarcasm and wit. As a woman, I had fun relating to her experiences in her male-dominated field, but she did call me out for being a millenial. I was in the minority on that demographic because the crowd trended older, which, at one point, prompted a competition to see who had been married the longest. There were more than a few couples that had reached 40-plus years of matrimony.

Some of the comedy was more reined in and disciplined, but both comedians toed the line of controversial topics at times. After all, comedy cannot be without some degree of provocation and shock value. Still, I could see that the restraints were on a bit, which isn’t always a bad thing, especially if you plan to attend with a crowd of family members whose political, religious or other perspectives span a wide range. (No one needs a fight to break out during the car ride home.)

Patrick Garrity had me laughing out loud with a great set of stories and jokes that included some side-splitting impressions and sound effects. At one point he played invisible bagpipes, and at another, he imitated the snoring habits of his father. He did get a few playful groans from audience members when he proclaimed that golf was not a sport and roasted Tiger Woods for his extreme physical regimen: “Come on, Tiger Woods’ biggest rivalry throughout his entire career has been Phil Mickelson – you know, the guy who’s doing arthritis commercials?” Despite any toning down on the part of the comedians, I left the comedy club having laughed out loud a good amount, and I’m eager to go back.

The next event will be Nov. 14, when the comedy series will welcome Robert Baril and Mary Santora. According to his bio, Baril is one of the fastest-rising comedians in the Twin Cities and uses his sharp wit to cut through the most dense political and hot-button issues of the day. Santora was named Best Undiscovered Comedian in Ohio by Thrillist in 2018 and Best Female Comedian by Cleveland Scene magazine in 2016 and 2017, and she was part of the 2018 Best of the Midwest competition at LaughFest in Grand Rapids, Michigan.

To make reservations for dinner and/or the comedy show, call 800.273.7877. Enter through the main entrance of the Landmark Resort’s Carrington Pub and Grill, 7643 Hillside Road in Egg Harbor.