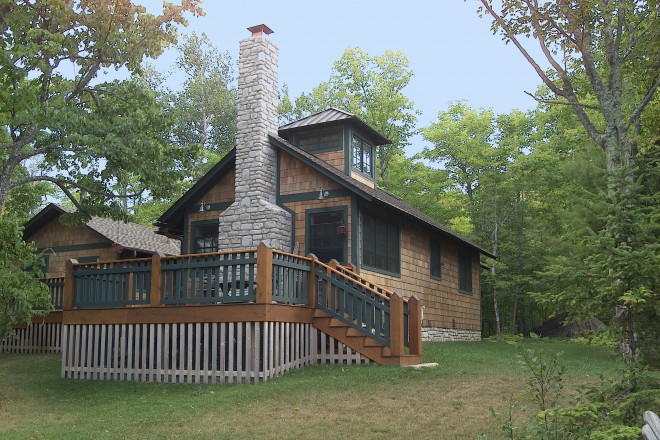 The stones for the new chimneys were tumbled to give them an aged look. Photo by Chris West.

When Charlie and Katie Brumder sold their log home in Marshall’s Point in the early 1990s they knew it would not be their last Door County home. Charlie, whose family once owned a cabin on Chambers Island, has been vacationing in Door County for as long as he can remember and both he and Katie feel it is an integral part of their lives. When the time was right – actually a little sooner than they planned – the Brumders found themselves purchasing a stunning 20-acre stand of hardwoods at the tip of the peninsula, known for decades as Lands End.

As I wind down the gravel single-track road to interview the Brumders, I wonder what I would do if I encountered another car coming in the opposite direction. The narrow driveway that serves two other homes in addition to Lands End snakes through tall hemlocks and hardwoods, squeezing through so tightly in some places I notice long gashes in tree trunks where vehicles have rubbed against them on numerous occasions. Despite its all-wheel drive feature, I know my station wagon is not designed for off-reading in a forest. The driveway appears to be built more for long strolls through the woods, which I later learn is how the Brumders and their neighbors use it most often.

Lands End is a welcoming home, casual and inviting, spacious – not sprawling – and in tune with its natural surroundings. It’s easy to see why the Brumders fell in love with the property even before their painstaking two-year renovation of the home and garage. I sense the property is rich with history and that this history is still an important aspect of it today.

The property in Gills Rock known as Lands End originally belonged to the family of Dr. Margaret Brookes, a Professor of Chemistry at the University of Chicago. In the 1920s, Brookes’ parents moved two 13th century log homes from the Newport fishing village (now incorporated into Newport State Park) to a large tract of land along the rustic shoreline of Death’s Door. They dismantled the cabins and reassembled them into a six-room log home.

Lands End was an integral part of Dr. Brookes’ life. Her summers spent in the solitude and vibrant natural environment brought balance and harmony to her otherwise urban life. However, in 1975, with advancing age making it clear that her summers at Lands End were limited, Brookes reluctantly decided to sell the property that had been in her family for over half a century. After much consideration, she determined that the division of the property offered sufficient financial benefit to justify development. However, she was deeply concerned by the small lot subdivision she had begun to witness in northern Door. In an effort to preserve the landscape she so loved, Brookes elected to divide the sixty-some acres into eight lots and recorded restrictive covenants prohibiting their further division. By 1976, all the lots had been sold to just five buyers, preserving the integrity of the land even more than Brookes could have hoped.

Dr. and Mrs. Stephen Post of St. Louis purchased two of these parcels, totaling twenty acres, including Brookes’ log home and retained the name Lands End for the property. The Posts enjoyed their rustic summer retreat, maintaining it in much of its original state for almost twenty-five years. One important change they did make, however, was to reinforce the restrictive covenants that Dr. Brookes had recorded with the deed by creating a conservation easement with the Door County Land Trust. They did this in joint effort with several of their neighbors, effectively preserving all of the original Brookes property and more.

This conservation easement is an important component to the Brumders and one of the many attractions for them when they purchased Lands End from the Posts. They take pride knowing that their property, as a ward of the Land Trust, will be protected for future generations. Additionally, the Brumders and their neighbors have discussed acquiring bordering acreage along the highway to add to the trust. “There is no prettier view than when you drive from Gills Rock to Newport,” Charlie reflects, “and the view corridors are so important to keep.”

In addition to the preservation of the land, the Brumders went to great lengths to preserve the rich

history of the log home on the property they purchased. They hired local builder Carlson-Erickson to construct two additions – one on either side of the original home – that would compliment and enhance the traditional architecture. One side included the new kitchen and great room, the other side the master

suite. The original kitchen was converted to a wet bar, but otherwise the rooms of the cabin were retained for their initial uses. In fact, the Brumders made every effort to preserve the original home. The walls needed to be power-washed – “to get the bugs out,” Katie explains – and re-chinked, but the logs were replaced to their primary positions, and the original floors and fireplaces were retained. Walking through the house, I can feel the history in each room – the cozy dimensions of the dining room, the “sleeping loft” feeling of the upstairs bedrooms, the weathered knotty pine logs.

The Brumders took their time with the renovation project, doing most of the conceptual design work themselves. The fact that they weren’t in a hurry made each hurdle in the process a challenge rather than a nuisance, and thereby it was an enjoyable and rewarding project. Their journey to create a remote and private retreat for themselves and their children spanned about a two-year period. They took each step piece by piece and the home came together like a puzzle. I get the sense that they would do it all over again, given the opportunity.

One of the many challenges was finding materials that would complement the 1stn century log home. The first piece of the puzzle was locating log homes of a similar era that could be dismantled and used to construct the additions. Jerry Duane, who helped Charlie build his first log home in Marshall’s Point and who had been in the business of finding historic, ethnic homes for Old World Wisconsin, searched out seven log homes all over the state and had them dismantled and shipped to Gills Rock for the addition project.

Next came the stones for the new chimneys. The Brumders wanted stones that would match the chimneys of the original home. John Sawyer of Carlson-Erickson found a company in Sturgeon Bay that was taking local shoreline stone and putting it through a tumbler to give it an aged look The resulting product was an almost perfect match.

Another challenging piece of the puzzle came in the finishing stage of the project. The Brumders wanted the interior walls to have an old-world European feel with smooth plaster and large radius corners. They were told that Alberts Plasterers had to bring an old salt out of retirement for the job because none of the young plasterers knew how to achieve this look The outside radius corners were molded by hand and the interior corners, the Brumders later learned, were smoothed out with a beer can – the perfect Wisconsin solution.

The challenges the Brumders and their builder surmounted are too numerous to recount in full, but the end result of this labor of love is a comfortable retreat nestled harmoniously into its natural environment. While they both relish their time at Lands End, Charlie looks especially forward to the day he spends with their three-year old daughter before the rest of the family drives up from their Milwaukee residence. Eily, the youngest of the Brumder clan, affectionately calls Lands End the “county house” and as she and Charlie take adventures into the woods, she soaks in the natural surroundings with the wonder of childhood innocence. Through the efforts of property owners and conservation groups like the Door County Land Trust, Eily will be able to recognize the landscape of her childhood when she returns with children of her own one day.