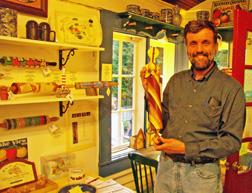 Sweetie Pies’ 4th Annual “High Roller Art Contest and Silent Auction” will come to a close on October 17. The day marks the last that the public may place a bid on imaginative works by local artists based on the theme of a rolling pin.

This year’s “high rollers” have been gracing a wall at the Sweetie Pies shop since May. Over the season, visitors have voted for their favorites among the 10 entries. On Labor Day, nearly a thousand votes were tallied and the winners announced. Peter Sherrill of Forestville took first place with his distinctive rolling pin crafted of nine varieties of wood. Abigail Holzschuh came in second with a rolling pin in a Rubik’s rendition and third place went to last year’s winner, Gerald Richter, for his Door County scene.

Sweetie Pies, open daily from 10 am to 4 pm, is located at 9106 Highway 42, just south of Fish Creek at the Settlement Shops.