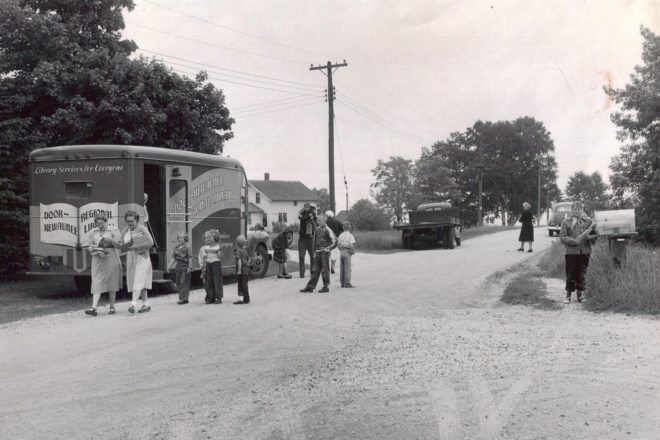 When the Egg Harbor Historical Society hosts a celebration of the bookmobile April 11, someone who knew it better than anyone will be in attendance.

Gary Bellin drove the Door County Bookmobile in its final two years before it broke down for good in 1989. His route took him to schools and to corners in rural outposts – south to the Union Town Hall, Cedar Creek, Clay Banks Road, and Stevenson Pier, north to Zion Lutheran School, German Road, even all the way to the Pioneer Store in Ellison Bay, one of his toughest treks.

“I had to take a roundabout way out of town because I couldn’t always make it back up the hill in that big bookmobile,” Bellin said.

His stops were placed in the newspaper each week and announced on the radio. When Bellin pulled up, folks from the neighborhood rolled up on bicycles, in cars, and even on horseback.

His clients ranged from young children searching for their first reads, to moms and dads finding selections for their kids, to retirees and summer residents.

“The kids were fun,” he said. “They’d take half an hour just looking over the books, flipping through them, reading some of the shorter ones. The schools had to put a time limit on how long they could be inside the bookmobile. ”

“It was a nervous drive, interesting to handle, that’s for sure,” Bellin said. “You had books stacked to the ceiling, so I tried to avoid tight turns. It would just kind of rock as you drove, and the driver’s seat swiveled so you could turn and check books out, then turn back to the front when you were driving. But sometimes it would spin while you drove, and there wasn’t a seat belt, so it was interesting.”

The original bookmobile truck broke down one final time in 1989, and after that Bellin drove the book van until the county discontinued the program in 1997. By then local libraries had improved, school libraries were larger and more advanced, and residents were more mobile, making the service obsolete.

The old bookmobile was purchased by historian John Enigl. He towed it to his Egg Harbor property, where he used it to house his huge collection of books. That’s where it sat until the Egg Harbor Historical Society purchased it in 2014, planning to restore it and repurpose it as the Door County History Mobile. Once complete, it will hit the road again, bringing stories of Door County’s past to events and far-off corners of the peninsula, just as it connected people to the worlds in the pages of its books.

The National Bookmobile Day and Open House will be held from 10 am until 1 pm at the Egg Harbor Library at the Kress Pavilion. Other special guests include Door County Library Director Tina Kakuske and Nellie Bly the therapy dog. There will also be refreshments and book giveaways. This event is free and open to the public.