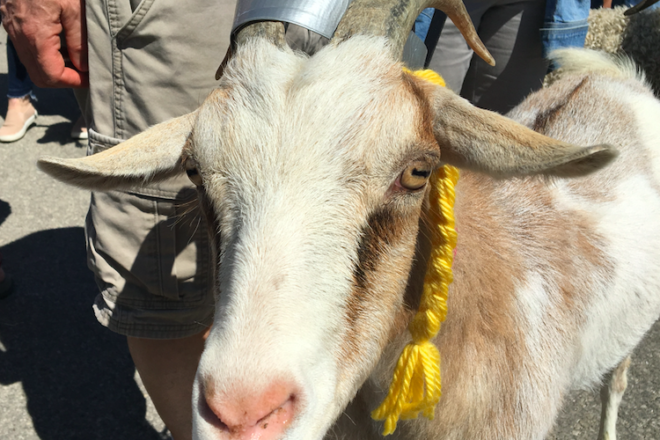 Thirty minutes before the seventh annual Roofing of the Goats Parade, parking became scarce in Sister Bay. Pedestrians streamed down the hill from the south, and from the marina and Bay Shore Drive area from the north, to join a three-block-long crowd of spectators. They crowded the street to catch a glimpse (and lots of cell phone photos) of the very short – but now wildly popular – goat parade.

“It gets bigger every year, I think because it’s a quirky, fun thing,” said Louise Howson, community coordinator for the Sister Bay Advancement Association.

What’s so strange about maybe 2,800 people showing up to watch roughly 30 goats walk down a street, some wearing Viking hats made from duct tape and pigtails of braided yellow yarn? Other quirky activities of the short parade included staff of one restaurant pushing staff of another in a wheelbarrow painted to look like a Swedish flag, and two men driving a Swedish-style log cabin built around a golf cart.

In addition to bringing people to the downtown eateries and beer garden, which opened early for a stein-holding contest and outdoor concert, the event raised money for a good cause. One hundred percent of the proceeds from sales of “goat-plop arrows” ($10 each) went to the local food pantry. Event-goers eagerly bought them because they also served as goat-chip bingo cards for the chance to win a kayak donated through Husby’s, a $100 gift certificate to Al Johnson’s Swedish Restaurant, and tours of 3 Sheeps Brewing Company (which contributed a keg-wheeled bike to the parade) and Door County Creamery, which contributed goats and a lot of their kids.

Many bought the tickets to support the cause, however. “Ten dollars for the food pantry? I’ll take four,” said Barb Ladd of Crystal Lake.

“If the goat poops on your sticker, you can win a sticker, plus you get to write a note to a goat,” Howson said.

Post-It-sized stickers were placed in a semi trailer-sized array in the street in front of Al Johnson’s, where the goats took a pit stop before the restaurant’s goats were led up steps to the sod roof of the landmark restaurant.

Howson said the sticker sales brought in almost twice as much as they did the previous year for the Kononia Kupboard Food Pantry, housed in the First Baptist Church of Sister Bay. She didn’t provide an exact amount, but it surpassed $3,000.

“There are parts of our community that certainly utilize the food pantry,” Howson said. “That we can provide a nice donation to the food pantry is wonderful.”

Lars Johnson, one of the sons of the late Al Johnson, was elected marshal of this year’s goat parade. To celebrate, he and Gary “Belgie” Willems, co-owner of the Sister Bay Bowl, re-enacted the time when Earl Willems, a Packers fan, lost a bet to Bears fan Al Johnson and had to push him up the big hill in Sister Bay during a late-1950s Sister Bay Fall Festival parade.

“We aren’t going up that hill,” Lars said just before the parade. “We’re going a block down that way to the restaurant and the roofing of the goats.”

Lars said Door County Today approached him seven years ago to suggest that he have a goat parade, just on a whim, and the event took off.

“We started with one goat, and it just happened to be an awful day, with sleet and freezing rain – and we had probably a thousand people,” he said. Howson estimated that almost 3,000 people attended on this past sunny Saturday.

She thanked the Village of Sister Bay and its parks department for helping to set up and make the streets safe for the event.

“I can’t believe all the people who turn out for this,” Willems said.