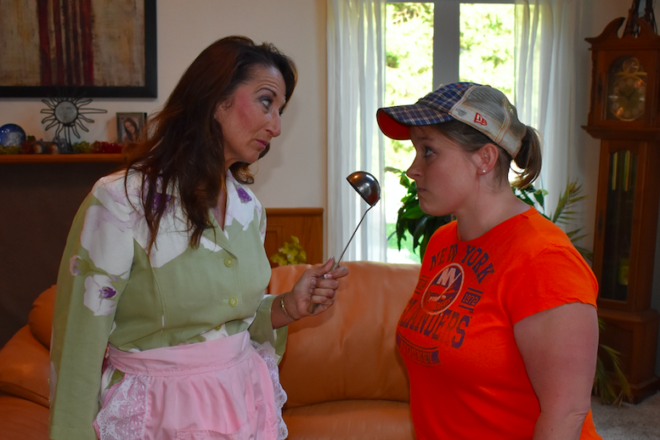 Neil Simon’s hugely successful play The Odd Couple is a ’60s and ’70s staple of stage and screen – the comic story of a pair of mismatched, middle-aged roommates. In 1985, Simon updated it to create a female version, and Rogue Theater is sharing it with Door County.

Olive Madison (Jamie Buesing) and Florence Unger (Lola DeVillers) bring not only the necessary opposite personalities to their characters, but they also make the audience believe that, despite their differences, they are good friends who care about each other and their group of Trivial Pursuit-playing friends. The Costazuela brothers (Stuart Champeau and Make Keene) are casual love interests for Olive and Flo, with many of their laughs coming from Spanish/English language confusion.

The show will be performed Aug. 29-31, 7:30 pm; and Sept. 1, 2 pm, at the Baileys Harbor Town Hall. Tickets are $15 per adult and $10 per student. During this production, Rogue Theater is honoring a loyal patron, Judy Porter: For every $15 ticket sold, $5 will be donated to the UW-Madison School of Nursing Scholarship Fund in memory of Judy Porter.