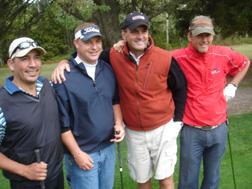 Last year’s defending champions of the ninth annual Johnny G Golf Scramble held Sunday, October 3 at Peninsula Golf Course, held onto to their title for the second year in a row. Two teams came into the clubhouse with scores of 10 under, but the team of Mark Bash, Mike Becker, Dick Brisch and Tony Gonzales beat out the second place team in a scorecard playoff.

Last year’s defending champions also remained victorious in the mixed division. The team of Rick and Siobhan Hecker and Lance and Ann Lucibello finished with a score of 66. The winning team in the women’s division was Teresa Martin, Sharon Daubner, Kristy Nelson and Janice Thomas.

The one skin of the day was awarded to the second-place team on the losing end of the scorecard playoff. Skip Kaeske chipped in on number 7 for an eagle to help teammates Tomm Hummel, and Bob and Bonnie Spielman. Charlie Hoke was the winner of $250 for being the closest to the pin on number 8, knocking his ball just inches from the hole.

One hundred and sixteen golfers participated in the event and enjoyed a beautiful fall day at the first time setting of Peninsula Golf Course. Appetizers, lunch and live music in an outdoor tent at Alexender’s followed play. Over $9,000 was raised on the day, with all proceeds benefitting the Johnny G scholarship fund.