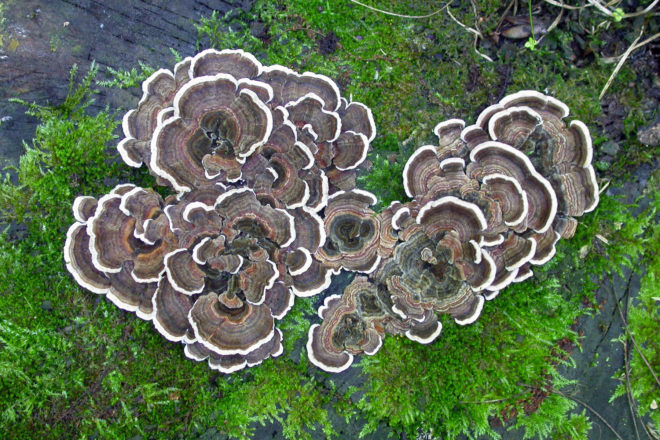 Now that we are halfway through November, most of the deciduous trees have lost their leaves. That’s why, when driving down any county road with forest edges, you can quickly pick out the northern red oaks: Many of them hang on to most of their leaves, which have now turned a dark red-brown color. American beech trees also retain many of their rust-colored leaves.

I enjoy seeing the silhouettes of the tall, bare hardwood trees. The shape of each tree’s crown can often tell you from a distance what species it is. Oaks usually have heavier branches. The few remaining elms have tall, narrow trunks with a bouquet-in-a-vase-like crown. Honey locust branches appear twisted, a bit like lightning bolts. An open-grown sugar maple has a large, rounded crown.

The wooded paths in our county and state parks are covered with a thick layer of leaves, so it’s difficult to find any fresh mushrooms now that they’re hidden beneath the fallen foliage. Perhaps you can still find a variety of woody mushrooms growing on standing trees, but more often they’re on fallen dead ones. A good number of these woody mushrooms are perennial, meaning they grow in the same place on the tree or log year after year.

The generic term for these is woody polypore. When examining the undersides of these tough growths, you’ll be able to see small circles that are either round or slightly angular. In some of the thin, leathery species, you’ll need a 10-power magnifying lens to see the tiny pores.

The holes are the openings to tubes in which the microscopic spores are produced and then released. All of the actively growing polypore mushrooms have their pore surfaces facing the ground so that gravity can help disperse the falling spores.

The horse’s hoof polypore is found on dying American beech or paper birch trees. They can grow for several years, adding a fresh, pale-brown layer on the bottom each summer. If the standing tree falls, these mushrooms often continue to grow the following year from the same spot on the trunk, but they do so at a 45-degree angle to the original fungus.

Another perennial woody polypore that’s very common in Door County is the artist’s conk, Ganoderma applanatum. (“Conk” is a general term for a very hard, woody fungus.) Some that I’ve seen were larger than a serving platter.

The fungus got its name because, if you can carefully remove it from the tree without damaging the white underside, that white, smooth surface can be a “drawing paper” on which you can produce a sketch with a pointed stylus, thus earning its name of artist’s conk. Every place where it’s etched turns brown. Once the drawing is finished, the large, woody polypore can be displayed and will stay unchanged for several years.

Turkey tail is the thin, leathery mushroom that grows in layers or masses on dead trees or cut stumps. When they’re fresh, their colors can be quite beautiful: concentric rings of varying shades of tan and darker brown with, usually, a white outer edge.

Because mushrooms do not contain any chlorophyll, they must get all their nourishment from other sources, such as dead trees, decaying leaves on the ground or material in the soil. Once in a while, we see those leathery turkey-tail mushrooms with a green color on top. Those are older mushrooms that have been on the tree for several years and have become coated with algae. A few larger polypores have moss coverings as well.

A walk through some of our parks where hemlocks grow rewards the hiker with a forest of ground pine and several species of clubmosses. These delicate ground plants stay green all winter. Mosses, too, maintain their green colors throughout the cold season.

There are some species of ferns that also keep their green color all winter while others fade and die back in the spring. The ostrich fern is a tall plant that forms an even taller spore case. This brown stalk carrying the spores near the top often remains standing upright in the snow all winter while the dead fronds lie beneath.

Bundle up, and go outside to enjoy the changing landscape and see what autumn has done to the natural world – but remember that the gun deer hunting season begins Nov. 23.