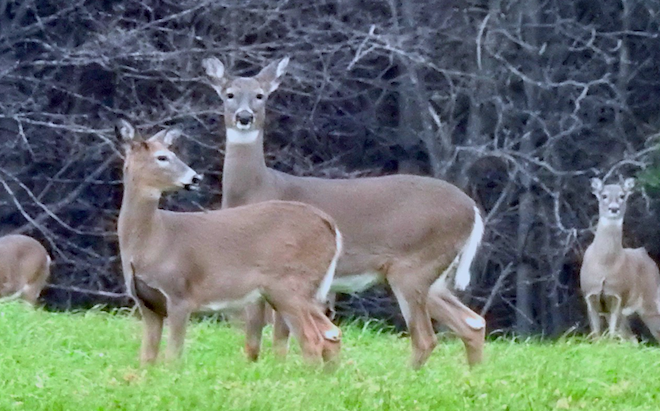 High deer populations lead to long-term damage to forests, extensive crop losses and a greater risk of collisions with motor vehicles. Wildlife biologists and Deer Advisory Councils in Door and Kewaunee counties are encouraging hunters to make use of abundant free antlerless deer tags this season. Photo by Kevin Naze.

Hunters have just two weekends left to sight in firearms, wrap up scouting and ready stand sites in preparation for the 2019 gun deer season opener.

Opening day, Nov. 23, is the latest possible under the current nine-day format that includes the Thanksgiving holiday. Last year’s Nov. 17 opener was the earliest possible and hit the tail end of the whitetail mating season head on.

“On the other hand, if this cold weather continues, that gives us a better chance at having snow cover and maybe freezing up some of those wet areas,” Pritzl said. “Adapting to whatever conditions we have is part of the challenge. There are a lot of deer, but with some crops still not harvested and all the water, scouting is going to be really important this season.”

Hunters who need a spot to sight in their firearms can take advantage of extended hours at many Door, Brown and Kewaunee County rifle ranges.

Higher-than-expected harvests in Zones A and C helped to prevent a big drop in the state’s black-bear harvest during a five-week season that ended in early October.

The preliminary total of 3,648 is the lowest since 2008, but it’s down less than 1 percent from last year. Warm, wet weather during much of September and abundant natural mast frustrated plenty of bait sitters.

Still, the state’s annual harvest – 3,500 to 5,000 for the past decade – has been the highest in the nation. Pennsylvania is No. 2, but a growing population there and extended seasons in 2019 could move that state to the top spot in 2019.

About half of the hunters who drew tags in Zones A, B and D filled them, but only about one in seven Zone C hunters were successful. The preliminary harvest includes 939 bears in Zone A, 650 in Zone B, 898 in Zone C, and 1,161 in Zone D.

Next fall could be the last season under the current four-zone system. Six zones were approved earlier this year, and they could take effect in either 2021 or 2022.

In 2018, about one in every three hunters applying for a Zone C tag got one with one preference point; it was a five-year minimum in Zone D, at least eight years in Zone A, and at least 11 years in Zone B.

About half of the annual black-bear harvest takes place during the first week of the season. After that, the majority is taken on weekend days, when hunter effort is highest.

Surveys have found that about 75 percent of hunters use firearms when bear hunting. The remainder use bows or crossbows.

During the past decade, about 70 percent of the bears taken are by those using only bait. About two of every three bears taken over baited sites are on private land. In comparison, about four of every five bears taken with the aid of trailing hounds are shot on public land.

Wisconsin will use cutting-edge technology to get a fresh estimate of the bear population this year, including DNA samples of hair from live bears throughout their range (844 “hair snares” of barbwire were set this year) and DNA samples of pulp extracted from more than 3,000 teeth of hunter-harvested bears.

In addition – and as is done annually to get an idea of the average age of bears harvested – a tooth from each hunter-taken bear will be cross-sectioned and aged at a lab in Montana.

The November moon will peak early Tuesday, be at half visibility Nov. 19 and be in the new-moon (dark) phase Nov. 26, four days into the gun deer hunting season.