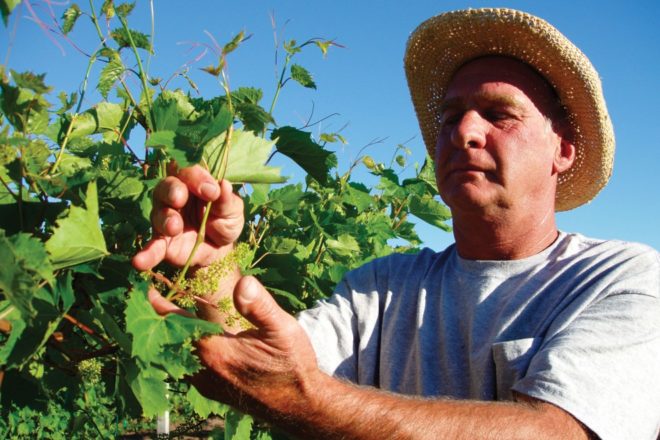 Farmer made Orchard Country Winery and Market a destination

Bob Lautenbach loved promoting Door County’s cherry industry. Whether it was filming a spot about cherry blossoms for a TV station, serving as president of the Wisconsin Cherry Growers Association or welcoming visitors to his roadside market at the entrance to Fish Creek, his enthusiasm was unmatched.

But he was happiest in the orchard, on the seat of his tractor, snug in a hoodie, pruning and nurturing the trees that were the lifeblood of Lautenbach’s Orchard Country Winery and Market.

During the days before July 11, when he succumbed to complications from a heart attack he’d suffered in May, Bob yearned to return from his winter home in Florida to his farm in Fish Creek to bring in the cherry harvest.

“He got a high from the harvest season,” said his son, Chris Lautenbach. “For him, the harvest was like a big game for an athlete. It got his adrenaline pumping.”

Bob didn’t get the final harvest he wanted, but he had more than done his part throughout his 65 years on the farm. He was born in 1948 in Sturgeon Bay to Ruth and Bill Lautenbach. In 1955, his parents bought a 100-acre dairy farm on Highway 42 just south of Fish Creek, where they managed a herd of 75 cows. During the 1960s, they started planting Montmorency cherry trees and got out of the dairy business. Sixty years later, the orchard they started still provides a picturesque entrance to Fish Creek.

Bob took over the farm during the mid-1970s after his parents died. He admired the small farm market run by fellow grower Ray Slaby a couple of miles down the road and vowed to create an even better version of it. He started with a couple of small huts by the roadside, but he had an ever-percolating pot of ideas and wasn’t content with a simple roadside market.

Bob soon started producing his own ciders and expanded the market, but during the early 1980s, when a winemaker planted a seed in his mind about making his own wine, it changed the future of the farm. Bob began selling fruit wines in 1985 and found a market that was more than thirsty for the product.

Along the way, he raised five children in the business – Carrie, Erin, Melissa, Chris and Anika – demanding a dedicated work ethic, but also fostering a love for the job.

“We worked hard as kids,” said daughter Carrie Viste, now one of three children who are part owners of the business. “There were times you wished you could hang at the beach more, see your friends more, but as you get older and think of all that time in the orchard, you think, ‘We were actually pretty lucky.’”

Their father set the tone for the work to be done.

“He lived a hard, very physical life,” Chris said. “His work ethic was second to none. But he loved it.”

Bob also worked hard for others. He was a strong supporter of the Door County Wine Trail, which brought all the peninsula wineries together to market the region as a whole. He was quick to share knowledge with fellow entrepreneurs, even helping others to get into the wine-making business.

He also had an eye on larger community problems. In 1999, he worked with Bob Papke to create employee housing on land he owned across the road from his market, but neighbors shot down the project.

“It was disappointing,” Papke said. “The need has only grown. But Bob recognized that need, and he loved Door County. He was a great guy and a great entrepreneur. His death is a real loss for us.”

Around the same time he was pursuing the housing project, Bob and his family planted their first vineyard with Frontenac and Maréchal Foch grape varieties. Five years later, they made their first wine with grapes from their own vineyard and named it Audrey Grace, after Bob’s granddaughter.

Despite a fire in the mid-2000s, the business continued to grow, achieving its mission to “create an experience that keeps people coming back.” Bob loved the color of cherries and insisted that every building be painted red. On the Sunday morning a week after his death, about 75 people were milling about inside those unmistakable red buildings by 10 am. Viste said the crowd was nothing compared to the day before.

“Dad would love this,” she said. “He really enjoyed the attraction of it, that everybody loved what he did. He loved having groups in and school groups here. Seeing people come back year after year.”

Bob Lautenbach loved his family, loved his roots on the piece of land on the hill. The new ideas, the cherry wine, the grapes – they all served the goal of keeping it in the family.

“If we hadn’t started the winery, all of this might not be here anymore,” Chris said from a chair propped between rows of cherry trees overflowing with the county’s signature fruit.

But it is here, and when spring arrives, a sea of white blossoms greets visitors. In mid-summer, those visitors see signs welcoming them to pick their own cherries, and in the fall, they can walk in the apple orchard. In the winter, horse-drawn sleighs pull bundled couples and groups through the orchard’s winter wonderland.

“He loved that his family business was the grand entrance to Fish Creek,” Viste said. “He always wanted the land looking nice, and his workers picked that up from him.”

Visitation for family and friends of Bob Lautenbach will be held Wednesday, July 28, 3-8 pm, with a service of remembrance at 6:30 pm, both at Huehns Funeral Home, 1414 Michigan St. in Sturgeon Bay. Lautenbach will be laid to rest at St. John the Baptist Cemetery in Egg Harbor.