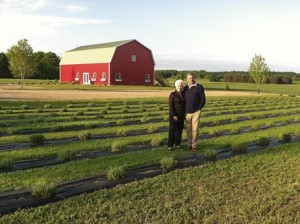 Edgar and Martine Anderson in front of their newly constructed lavender shop. The main field contains 10,000 plants, of which 2,000 will be in full bloom this summer. There will be a you-pick section where people can cut and assemble their own fresh lavender bundles.

Edgar and Martine Anderson thought, can’t lavender do the same thing for Washington Island as it has for Provence and the American Northwest?

Welcome to Fragrant Isle Lavender Farm & Shop, which has its grand opening on June 21 from 3 to 5 pm, with Jon Bartz, regional director of the Wisconsin Economic Development Corporation, and Joel Gunnlaugsson, Washington Island town chairman.

“This is the first from-the-ground-up project in recent history on the island, so it is quite a project for the island,” said Edgar Anderson, referring to the 4,000-square-foot retail shop and café the Andersons built with business partner Helene Meyer at the corner of Town Line and Airport Roads. 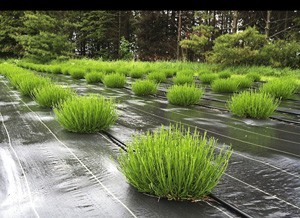 One of three Fragrant Isle fields showing the lavender greening up and sending up buds that will bloom in mid-July.

“The café serves lavender-related products with chocolate and ice cream and all those kinds of goodies,” Edgar said. “Later on this year the café will be expanded to include bigger meals, lunch, some wines, cheese and charcuteries, very much in the French theme.”

The idea began when the Andersons, who had been visiting Door County from Chicago for years, decided to make Washington Island their permanent home a few years ago.

“They tripled in size the first year,” she said. “I was very intrigued, and we were kind of looking to have a second career after working in the corporate world in Miami and different locations. We started digging into creating something small in the beginning. The idea was really to start small, something to do in our retirement years.” 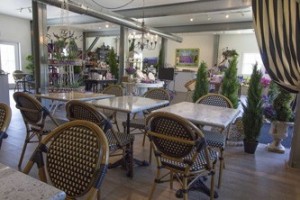 Interior of the Fragrant Isle lavender shop where 60 different kinds of lavender products are sold. There is also a cafe where people can buy coffees, pastries, chocolates, ice creams and other lavender-influenced items.

“We started fooling around with the lavender and realized the Island has the soil conditions in terms of sandiness, well-drained, high pH that lavender likes,” Edgar said. “If we choose the right varieties, you can grow lavender in this hardy climate zone. We do know certain varieties will do better than others, but we’re still in the testing period.”

They are currently growing 12 varieties of lavender.

“We have so far three fields that have about 14,000 plants right now,” Edgar said. “About 5,000 of those plants are in their second season, so we’ll be getting a crop out of those. Many of them will be left to bloom the whole summer just for the customers to enjoy the flowers and we’ll harvest them at the end of the season to extract the essential oils.”

Look for the beautiful lavender blooms in mid-July into August.

Eventually, in three to four years, they hope to have 30,000 lavender plants.

Two people will be employed year round, and another eight will be seasonal.

“That’s not including people we hire to work in the fields or the contractors,” Martine said. “The Island has not seen that for a number of years. It’s very stagnant. We’re hoping this will give an exposure outside Washington Island to come and explore Washington Island.”

“The Islanders are very welcoming,” Edgar added. “One of the things how they demonstrate that, when it came time to plant, volunteers just showed up to help us plant. It made my life a lot easier. They just want to see this succeed.”

Next year Edgar said they plan to host their first lavender festival.

“Those type of festivals have been very successful in other parts of the country, particularly in Sequim in Washington State. Their festival attracts 30,000 to 40,000 people. That’s part of our vision for the future, agri-tourism. We’ll be working with state and county agencies to help make this happen and this becomes a real destination.”