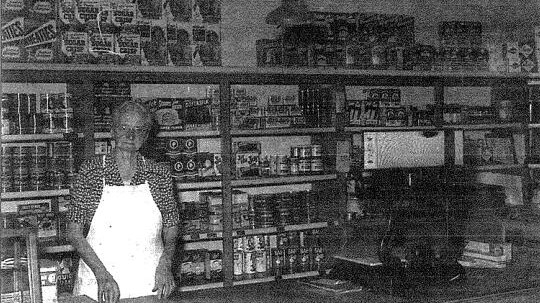 Mary Fischer in the store in Maplewood. Photo courtesy of Alice Busse Shepherd.

During the summer of 1876, William B. Lawrence opened his meat market on Cedar Street at what is now 120 N. 3rd Ave., the current location of Wilkins & Olander. (Street names were changed during WWII.) There were already two grocery stores, a blacksmith shop and a saloon on the dirt road. By 1889, the road still appeared to be unpaved, but the frame buildings had been replaced by handsome brick structures with arches above the triple windows on the second story.

William’s son, Myron, bought the market in 1879, when he was just 21, and in 1901, he built The Cove Resort – with accommodations for 200 people – from the remains of an old rooming house. (The site is now part of Crossroads at Big Creek.)

Myron’s son, Dudley “Dud,” took over both The Cove and the east-side market before Myron’s death in 1934. When Dud retired during the early 1940s, his daughter, Ruth Lawrence Fischer; and her husband, Carl, took over the meat market and expanded its offerings. Carl had gone to work for Dud when he was just 18 and fell in love with the boss’s daughter. The Cove Resort burned the day Ruth and Carl were celebrating their marriage there.

Carl had grown up in the grocery business in Maplewood, where his parents, John and Mary Fischer, operated a small country store in one room of their home. Their granddaughter, Mary Fischer Stanton, particularly remembered the pot-bellied stove that heated it.

In 1968, Ruth and Carl purchased a lot across from Peterson’s Pool (the aquatic center donated to the city by the Peterson family in 1963) and built Fischer’s Super-Valu at 216 S. 3rd Ave. The brick store had a nautical-themed interior, was twice the size of the original market and had a parking lot for 50 cars.

The Fischers’ son-in-law, James Jensen, was also involved with the new store, and he and his wife, Sandra, took over the business when the Fischers retired. Super-Valu opened during the summer of 1968, and Wilkins & Olander held a grand opening of its clothing store at 120 N. 3rd on Nov. 1. The old Super-Valu building is now the site of Healthy Way Market.

There is documentation for all of this information, both from old newspaper clippings and from Ruth and Carl’s daughter, Mary Fischer Stanton, who grew up in their store in Sturgeon Bay. She remembered going with her father when she was eight or 10 to pick out cows to be slaughtered at the 3rd Avenue site.

But there’s a mystery: A just-discovered news clipping from Oct. 31, 1924, says that, effective Nov. 1, Dud Lawrence was selling the business to Frank Pfeifer and moving to Miami “to go into other work.” We’ve found no later record of Pfeifer’s ownership, and there are pictures from 1938 showing Dud in the store with employees Florence and Art Mentz.

Mary Stanton remembered that she was a very small girl during the early 1940s, when her parents took over the store. No one else in the family recalled a sale out of the family. Apparently, something happened between Oct. 31 and Nov. 1, 1924, that canceled the sale to Frank Pfeifer.

Treiva Wilterding recalled that her step-grandfather was the butcher when Dud Lawrence owned the market. Her memory is that there was a wide opening between two rooms that faced the street. Dud used one of them as a meat market. When Ruth and Carl took over the business, they used the opposite room. “You could do all your shopping at Fischer’s,” Wilterding said.

Alice Busse Shepherd and her sister, Elaine, grew up on a farm a few miles from Maplewood. She has memories of the pot-bellied stove in the one-room store run by Carl’s parents.

“All the food was on shelves behind the counter,” she recalled. “Shoppers gave their order to Mary Fischer, who collected the items for them. After adding up what was due, she would select two pieces of candy for my sister and me.”

Tom Wagner, whose family owned Wagner’s Meat Market in Maplewood for three generations, also remembered the Fischers’ little store because of the candy-filled glass jars on the counter.

Although not connected to an old store, Lynette Harris has a wonderful memory about farm-to-table eggs during the mid-20th century.

“While reading some old family letters,” Harris said, “I learned that my Chicago grandmother, Lillian Schroeder, would send a letter to my mother, letting her know that she wanted a crate of eggs from my local grandma, Beatrice Moore.

“The message was conveyed, probably through my dad, and he or my grandpa would pack up the eggs and take the crate to the train station. Grandmother Schroeder would get her eggs in Chicago later that day. (I assume Gramps picked up the eggs in Chicago since neither of my grandmothers drove.)

“See the lengths Illinois folks would go to for fresh Door County products? Has anything really changed?”