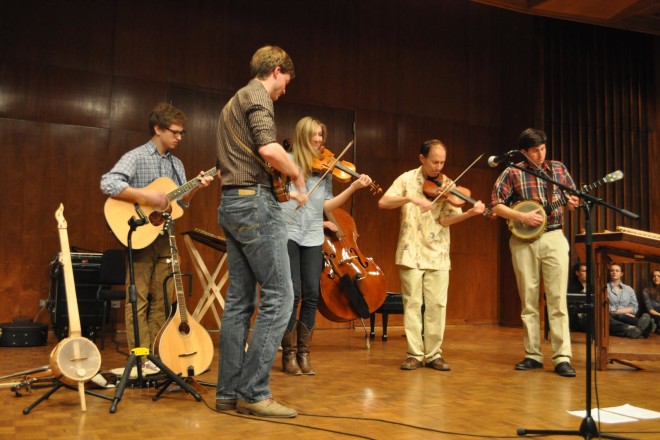 The Lawrence University Fiddling Club is a grassroots ensemble that you might expect to find in Ireland rather than on a college campus in Appleton. In the tradition of Gaelic music, young musicians meet once a week with their fiddles and make music, and though a number of them are classically trained and connected with the Conservatory, sheet music is left at home. Rather, tunes are passed along in a folk tradition, as the musicians learn by ear from one another.

On April 17 the University Fiddlers will perform for a Door County audience at Björklunden under the leadership of the student club president Isabel Dammann.

“This is a concert where foot stomping and hand clapping and making noise is appreciated,” said Leila Pertl, a lecturer in music education and a harp instructor at Lawrence, and also an enthusiastic supporter of the Fiddling Club.

The organization, which includes a base of eight to ten student members, is officially recognized by the university, Dammann said. The group meets Friday evenings, sits in a circle, and “what we know we teach to each other,” she explained. “This is a collaborative group.”

While the musicians are primarily fiddlers, they occasionally are joined by other string players, and sometimes by the adviser of the club Brian Pertl, Dean of the Conservatory of Music, who plays his didgeridoo, and by his wife Leila Pertl, who plays violin in addition to harp.

The repertoire of the Fiddling Club includes Irish and Scottish Gaelic standards, along with bluegrass and old-time folk, the music chosen following the interests and the memories that members bring to the meetings.

“Last year the focus was Gaelic,” Dammann said, “but this year it’s more old-time and bluegrass.”

The group occasionally performs on campus and in the area, and this spring at Björklunden as a culmination of a weekend of activities, including a workshop given by musicians Kimberly Souther and Laura Thompson, and Irish dance instruction by Leila Pertl.

Some of the tunes that might be played, Dammann said, include “Frank’s Reel,” “Big Scioto,” “The Mouth of the Tobique,” “Horseshoes and Rainbows,” and “Calliope House.”

Like a number of the club performers, Dammann is classically trained on violin. A native of Portland, Oregon, she chose Lawrence for the opportunity to pursue double majors, violin performance and geology.

Because she was introduced as a child to the violin by the Suzuki method, “I can learn different tunes by ear,” she said. She finds that the styles of fiddling and classical violin complement each other, as “fiddle music helps my confidence and stage presence, and I have fun. I think fiddle club is a great opportunity to explore technique and become more comfortable with my instrument.”

“Isabel is fantastic!” Dean Pertl said, praising her accomplishments both as a musician and a scientist, pointing out that in addition to her violin performance, she is involved with Tambo Toké, an Afro-Cuban percussion ensemble. And when she studied geology for a term in Italy, she took her violin with her and played with a prominent geologist-violinist under whom she studied.

The Lawrence University Fiddlers was formed three years ago by Martha McDonnell, who has since graduated. Like Dammann, she was also a violin performance major.

Dean Pertl remembers when McDonnell was a student in his music entrepreneurial class. “She revealed a love for fiddling that no one knew she had,” he said. “She had worried that the Conservatory and her peers would look down on her.

“But when she created a bluegrass group as her class project,” he continued, “and she started fiddling, everyone became excited, and over half the violin students wanted to take lessons!”

And the University Fiddling Club was formed.

“Hers is one of my favorite stories,” Leila Pertl said, “someone who made a huge impact on the Conservatory and the campus.”

“During her senior year she auditioned as a violinist in Chicago for Sting’s musical The Last Ship,” Dean Pertl said, “the youngest to audition, and she got the part! Now she is violinist for Steve Martin’s musical Bright Star.”

“When we send kids out into the 21st century,” Leila Pertl said, “it is necessary to be multi-musical, to be fluent in other genres.”

The Björklunden performance “will be an exciting concert,” Dean Pertl said. “I may sit in with my didgeridoo.”