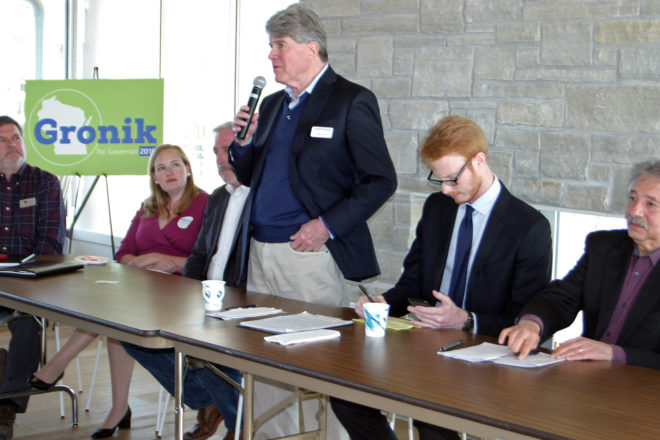 Lawyers, guns, money and pie were big topics of conversation at the Kress Pavilion in Egg Harbor on Sunday when five Democratic candidates for governor and two candidate surrogates appeared at the Door County Democratic Pie Party. Around 80 people attended the event.

They represent a mere fraction of the 15 declared Democratic candidates who will face off in an Aug. 14 primary to decide who will run against Walker in November.

The Pie Party format allowed each candidate/surrogate five minutes for an introduction, which was followed by written questions from the audience. Candidates/surrogates had 90 seconds to respond to questions. 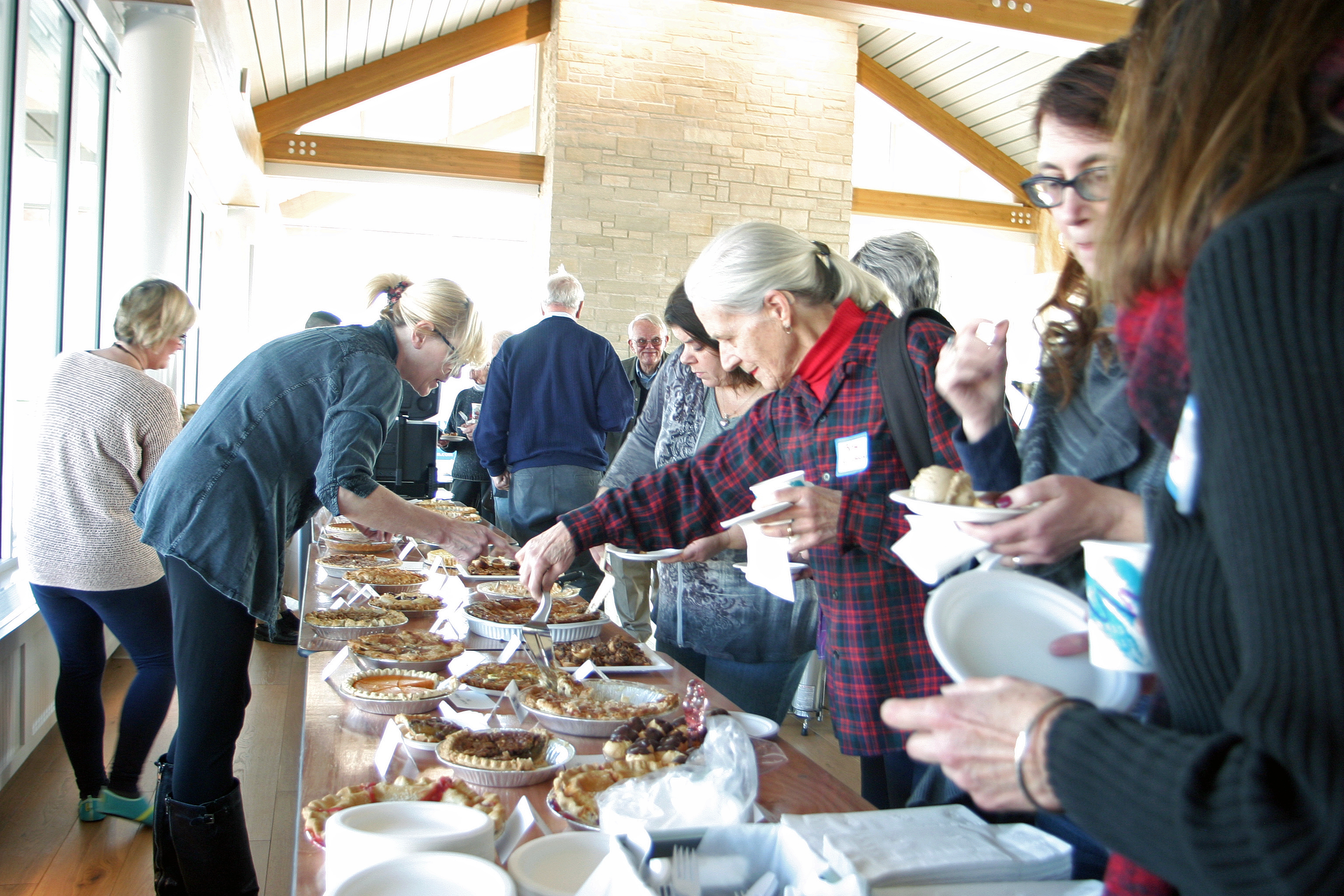 Around 80 people attended the annual pie party held by the Democratic Party of Door County, for pies and presentation by five Democratic gubernatorial candidates and two candidate surrogates.

Three of the candidates in attendance are lawyers – Flynn, Roys and Soglin (Rep. Wachs is also a lawyer) – and two of them said they would use their legal knowledge to overturn the Foxconn deal.

Wachs surrogate Kreitlow was the first to address the audience question of what could be done to ameliorate aspects of the deal with the Taiwanese flat screen maker. He said the deal would not be easy to stop.

Roys said she would do her best to “roll back some of the most horrific provisions of the Foxconn deal, but as an attorney, I think it would be irresponsible for me to commit to saying I will be able to stop it.” However, she added that Gov. Walker, a longtime foe of public transportation (a fact made evident by the recent backfired ad campaign to attract Chicagoans to Wisconsin by mocking their public transport), provided the blueprint for canceling contracts when he turned down $810 million for a high speed rail system.

Gronik agreed with Roys that there appears to be no exit from the Foxconn contract, and used his response to hammer at the lack of transparency in the Foxconn deal and the lack of interest by state lawmakers in negotiating a fair deal for the people of Wisconsin.

“I respectfully disagree with my friends on this panel,” Flynn said. “That deal can be stopped. One of the first things I will do is start litigation to stop it.”

Flynn expanded on that by saying as a matter of constitutional law, an unconstitutional contract is not a contract, and he believes that the environmental and legal exemptions provided to Foxconn represent preferential and unconstitutional treatment.

“You need a fighting governor,” Flynn said, adding that Attorney General Brad Schimel is “as bad news as Walker. If he stays attorney general, I’ll bring in private counsel.”

Harlow said the Foxconn deal is an unacceptable risk for the entire state and that he “will not rest until we turn over every avenue to stop the Foxconn deal, and I believe there is a very good chance we can get this done.”

Surrogate Schierl said McCabe has been a vocal opponent of the Foxconn deal.

The candidates were then asked about their support for education and teachers, and how they feel about gun control and schools.

Schierl said McCabe would be a pro-worker governor who would overturn Act 10. She added that while McCabe respects the state’s hunting tradition, he is for common sense gun control.

“The NRA has been on a mission to get as many guns into the hands of as many people as they can,” Soglin said. “So the response to this will be to get more guns out in society so we can all shoot each other.”

Soglin added that it’s about more than repealing Act 10. “It’s restoring the right of collective bargaining and negotiating,” he said.

“Traveling the state, everybody I talk to, especially gun owners, especially hunters, whether they are Republicans or Democrats, they all think, No. 1, the NRA is crazy, and No. 2, nobody should be able to purchase or own an assault weapon,” Harlow said. “Common sense gun legislation is needed.”

“As governor, I will repeal Act 10,” Flynn said, and added that as a Navy veteran, “I don’t know any veteran who thinks civilians should handle guns they were trained on. That’s crazy.”

Flynn said he is for universal background checks and waiting periods to purchase guns.

“We will not arm teachers. That is crazy,” Flynn said.

Gronik said he would never take a dime from the National Rifle Association and that he would ban assault weapons, military ammunition and bump stocks.

“We just need a government willing to do it,” he said.

He, too, added that he respects the hunting tradition of the state. “It’s not about that. It’s about common sense gun laws that stop this slaughter.”

Roys pointed out that on Feb. 20 – six days after the Parkland school shooting where 17 students and teachers were killed – Assembly Republicans voted against a proposal for universal background checks for gun buyers.

“It’s the single most important thing we could do, yet every single Republican voted against it,” she said, adding that immediate action needs to be taken to institute waiting periods and assault weapon bans.