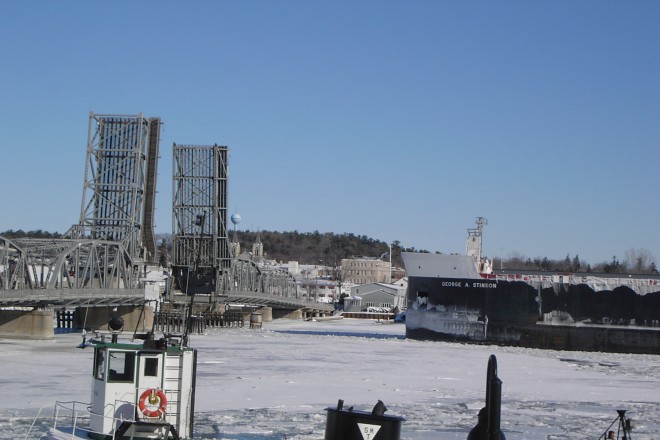 Berthing a freighter in the Sturgeon Bay channel. Photo by Brian Kelsey.

“The iron boats go as the mariners all know, with the gales of November remembered.”﻿

The predawn morning is met with a blanket of fog that hangs heavy over the thickening ice of Sturgeon Bay’s outer harbor. Harsh, cold winds pile snow into ripples and drifts across this hardened white sea. In the partial clearing lies a 1,000-foot freighter at anchor off Sturgeon Bay’s Sherwood Point Lighthouse. Half visible in the dim morning light the freighter slowly comes into a ghostly view. Sherwood Point light station, the last manned station on Lake Michigan, drones its warning cry and sends out its regimented beacon of caution.

Three tugs from Selvick Marine Towing of Sturgeon Bay are northbound, channeling between buoys and the Potawatomi State Park’s rugged shoreline, where icy conifers strut out from their limestone bases. Selvick Marine is the principal towing outfit that freight companies and Bay Shipbuilding rely on for shoring up 16 to 18 ships annually. The crews of these tugs, typically a three-man team, are not waiting for the sun to rise, but rather for the fog-laden conditions to abate. Sharon Selvick, of the family-owned and operated business, explains the operation of towing:  “I usually get a call the day the freighter is coming. The captains and crew are on call day and night, 24/7, and I’m on call, too.” Schedules are unheard of and the towing crews act much like a response team in order to berth the boats.

In order to tow in these behemoths, Selvick’s tugs and the U.S. Coast Guard’s Mobile Bay work to keep shipping lanes clear. “We’ll break ice to Sherwood Point or break to the lake if we have to,” explains Sharon. Standing in the bridge-tending station of the Bay View Bridge, I watch in amazement as the crystalline hull and decks of a 1,000-foot freighter steam through the spans. Lake water turning to ice creates a spectacular display; icy spirals and frosty designs cover her bow; anchors hold large icicles; and personnel in heavy coats wave from the deck. This particular ship, coming in under her own power, breaks up the remnants of bergs left by the tugs. Capable of maneuvering with both bow and stern thrusters, the freighter is met by tugs at the shipyard shoreline, spinning, backing and thrusting these hulks into their winter berths. The sight is remarkable as huge sister ships raft in twos and threes, filling the harbor with steel and their proud white decks and wheelhouses.

It’s lay-up season for the Great Lakes freighters and the men and women that put these giants to bed. Sturgeon Bay’s shipyard, Bay Shipbuilding Corporation, like Selvick Marine, comes alive with countless tasks and duties, fueling a local economy through the long winter months into spring.

“It’s like putting a giant puzzle together,” says Todd Thayse of Bay Shipbuilding, commenting on the configurations of the rafted boats that account for miles of ships. First, preliminary work may be needed in the shipyard’s docks prior to bringing in the freighters. Ice is often broken up with the tugs and then “washed out” with their huge propellers as they stem their padded bows to a seawall and thrust thousands of gallons of ice back into the Sturgeon Bay harbor. Then, a crew can dock a boat in mere hours if conditions are good, but cold weather and thick ice result in a seeming war of attrition. Thayse explains, “Winter docking can require up to five or six tugs. It can be as easy as an eight-hour revolution if the operation goes smoothly, or it could last days getting ice from the bottoms of the freighter hulls.” Clearing the ice and berthing a ship for the season once took seven days making homesick freighter crews rather anxious.

While these months mean a busy time for Bay Shipbuilding and Selvick Marine, the ice moving in marks the end of a long hard season for the crews of the freighters coming into port. Eager to be home once again, crews happily turn ships over to the yard in anticipation of rest with family and friends. Gone are the days of layovers when crews caroused while longshoremen unloaded a ship’s cargo to trucks and rails. Nowadays, the schedule onboard a modern Great Lakes freighter can be grueling. With self-unloading booms and efficient mechanization, ships can be emptied in record time. Bulk freight, such as coal and iron ore, fly straight from ship conveyors to hoppers. Thus, the ship’s turn-around time is down to hours – and since the operating cost of a 1,000-foot freighter can reach $75,000 a day, the boat must earn her keep.

Steaming until ports and passes are no longer navigable, today’s freighters run the risk of becoming ice bound in quick winter freezes. Many times a sudden cold snap will ice up the shallows of shipping lanes connecting the Great Lakes. If conditions persist, the lay-up location for a freighter will be determined by the thickness and amount of ice. Ice jams near Sault Saint Marie (between Lake Huron and Lake Superior) have forced many freighters to go to their nearest ports in either Duluth, Minnesota or Sturgeon Bay, Wisconsin.

Because freighters work well into the winter months (thanks in part to legislation designed to keep the steel industry thriving and competitive), the deployment of ice-breaking boats such as the Coast Guard Cutter Mackinac of Cheboygan, Michigan is essential. Her enormous ice-breaking capabilities have led this Coast Guard mother on rescue and ice-breaking missions throughout the Great Lakes. Though she has been the pride of the Coast Guard’s inland sea fleet, she sits weathered, ribs showing through metal plating, the result of years of bucking ice. She will soon be decommissioned and replaced by a new Mackinac icebreaker, being finished at the Bay Shipbuilding Corporation. She is a state-of-the-art icebreaker, built to break several feet of ice, while steaming at her top speeds – a display of power needed in this cold weather shipping game.

The advent of technology and larger ships may have extended the season, but the challenge of negotiating Great Lakes’ storms is still very real. Summer breezes quickly transfer into fall gales, leaving the seasoned mariner recalling legendary storms and the lives lost in them. One aged local newspaper clipping, for example, tells the story of a freighter crew fleeing their ship immediately after their tie up, many leaving personal effects behind in their rush. This particular crew, and many more, faced the epic killer storm that sank the Edmund Fitzgerald in the icy waters of Lake Superior – an event memorialized in Gordon Lightfoot’s ballad, “The Wreck of the Edmund Fitzgerald,” a poetic reminder of the forces of wind and water. For the individuals that work the boats, the winter lay-up couldn’t come soon enough. For the crew of the Fitzgerald, it never came at all.

Ironically, winter gales help keep some shipping lanes free as they break up thin ice and wash away flows, actually helping to extend the mariner’s season. Colder water is denser and means heavier waves punching into ship’s hulls. With waves capable of reaching 36 feet on Lake Michigan, many freighter crews welcome the sight of another year being closed in by ice.

Once these freighter crews disembark for the winter, the shipyard work begins. Five-year inspections bring four to eight boats into the yard’s Graving Dock. Dry docking pumps leave the behemoths high and dry, allowing inspectors and workers to complete their duties of maintaining the ships. Welders, pipe fitters, engineers and painters, just to name a few, run a continuum of upgrades in order to have the ships ready for the upcoming spring season.

For Bay Shipbuilding’s workers, laying up the ships, many of which were built at the same yard, instills a sense of pride. Work in the winter season of cold extremes is tough, and so are the men and women who accomplish it all here in the yards of Sturgeon Bay and her surrounding waters.