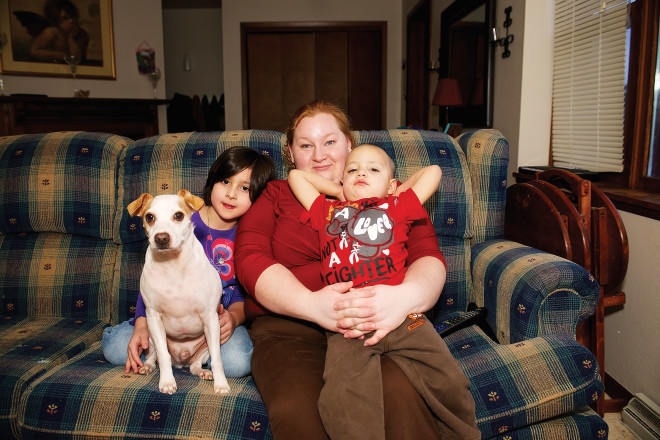 Alison Carreño knows that being the best parent you can be means staying connected to others. She was less than two years out of high school when her daughter Esmerelda, who is now six, was born. At the time, her husband was working four jobs so that she could stay home with their baby, but she quickly found that the isolation was taking its toll. That’s when she got involved with YAPS (Young Adult Parent Support), a program of the Wellness Center of Door County that offers education, support, and networking opportunities for young parents.

One day while shopping, Carreño ran into Kathy Tellstrom, founder and leader of the YAPS program, who encouraged her to attend a breastfeeding workshop. That was the beginning of a long and lasting relationship. “It was so important for me to get out and know that I wasn’t alone,” says Carreño. She, in turn, has also reached out to other young women and gotten them involved in the group.

The group meets at least once a month, and also stays in touch on a daily basis through Facebook. “We post events, coupons, baby equipment, questions, and parenting advice,” says Carreño. She tells about one young woman who posted that she was “down in the dumps” and struggling to stay in school. “I helped her out, talked her through it. I want these other young women to get where I am. They inspire me to do well to show them what is possible.”

“Everyone in YAPS has different backgrounds and different stories,” says Carreño. “But it’s a community, we rely on each other. And we can all relate to motherhood and adulthood.” Carreño describes the importance of Tellstrom’s leadership. “There is so much that goes on behind the scenes. Kathy gets phone calls from young moms, some are emergencies, and some are just questions. She makes sure families have diapers, clothing, and food. And she’s really good at making connections.”

Tellstrom has obviously inspired Carreño, because throughout her six years as part of the YAPS program, she has become a peer leader and role model in the group. “Alison has spoken on parent panels at high schools throughout the county, and she has done an incredible job at helping young people understand the realities of being a teen parent. Ali has always been a goal setter. She’s not going to let herself get stuck, she wants to move forward.”

For a program that started in 2004 with just three families, and now serves over 100 families per year, having parent mentors like Carreño is essential. “It’s huge for the other young moms in the group to see someone like Ali who has walked in their shoes,” says Tellstrom.

“It’s not easy being a young mom. People give you looks, and you hear comments,” says Carreño. It’s hard to believe that she ever let that get her down. Since her daughter was born, Carreño has worked several jobs and is about to complete her Associate’s Degree in Health Care Management, maintaining a 4.0 GPA. She has held several internships at local health care organizations, including Ministry Door County Medical Center. Eventually, she hopes to become a medical interpreter.

Carreño is aware that it is often the way we lead our daily lives that has an effect on others. “Don’t feel like you have to know someone personally to be an inspiration,” she offers. “People are watching!”