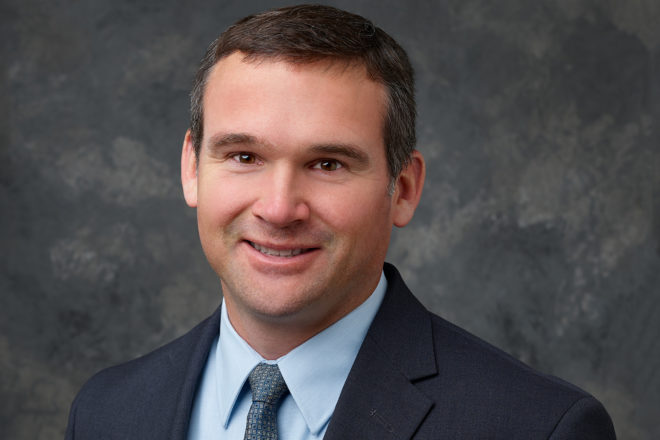 When asked why, as a hospital administrator, he’d become so involved in a local day care issue, Brian Stephens answered the question with a chuckle while coming to a realization he had never considered.

Stephens, CEO of Door County Medical Center, has been lauded for his efforts to resolve a local day care crisis that has affected many parents in Door County, including many who work at the hospital. However, a glimpse into his past provided him with insight into his motivation to help solve this problem – insight that hadn’t previously crossed his mind.

Stephens spoke about being a child of a divorced single mother who raised him and his sister alone for a number of years until she remarried. Day care was a big part of his life growing up, and integral to his mother’s ability to work and support his family.

“Wow, this just became a therapy session,” Stephens quipped. “I’m just joking, but as I think back on it, maybe there is something there that certainly wasn’t on top of mind as we were working on the [Door County] day care situation back in the summer. There could be something to that.”

Working parents in Sturgeon Bay and the surrounding area experienced a child care setback in June 2020 when the Door County YMCA announced it was closing the Barker Child Development Center, citing an inability to continue to offset the money the center lost annually on top of the revenue that was lost during the COVID-19 pandemic. The closure left the parents of 79 children scrambling to figure out where they could find alternative day care while they worked.

“What would have had to [have happened in my case], is my mom would have had to [have worked] with her sister and my grandmother to figure out a way to take care of us,” said Stephens, a native of Abilene, Texas. “I think that is what you see happen generally in Door County. So when the day care closed as a result of COVID, that’s exactly what was happening: Friends were helping friends, and families were helping families, but it wasn’t sustainable.”

Fuller said that her initial plan of reopening a child care center was not well received within the community, and she felt defeated when it was suggested that the best option might be to bring in a chain day care company to fill the void.

But DCMC stepped up by reaching an agreement with the YMCA to lease the Barker building, then subleased it back to Fuller’s organization.

“Quality child care is so incredibly important for the development of children,” Fuller said. “In that moment, Brian spoke up and said that [he] and the hospital believed in our plan and would continue to support me on this journey.”

The timing of the Barker Center’s closure, however, couldn’t have come at a worse time for DCMC. Stephens said the hospital closed down for six weeks during the spring as it prepared for a surge of COVID-19 patients that, fortunately, didn’t materialize. But when DCMC reopened, there was a backlog of patients who needed care, and the hospital was extremely busy.

“At that time, we needed everybody [working at the hospital],” Stephens said. “We had nurses on our inpatient floor who were swapping schedules so they could make sure they weren’t working together so they could take care of each other’s kids.”

Stephens said the measures that DCMC employees took to cover child care during the summer worked at the time but weren’t sustainable. The threat of a COVID-19 surge in the fall made the Barker Center’s closure even more perilous to the hospital’s ability to care for these complex patients adequately if hospital staff members were out caring for their children.

Fortunately for DCMC employees and other working families in the area, Fuller opened the Door Community Child Development Center early in the fall.

“The surge came, and we had people who were working without days off for weeks and weeks straight,” Stephens said. “If you would have added a day care problem on top of that, and [employees] wouldn’t have had a place to send their kids during the day, I don’t know how we would have done it.”

Stephens’ support in solving the issue created by the Barker Center’s closure goes well beyond the benefit experienced at DCMC. Fuller said that because of his efforts, 24 child care teachers have jobs, and 74 working parents have quality child care for their children.

“I’m sure Brian would say this was a small gesture, and he was just doing the right thing,” Fuller said. “I am grateful that there are people out there like Brian who aren’t afraid to support causes that matter to everyone in our community.”