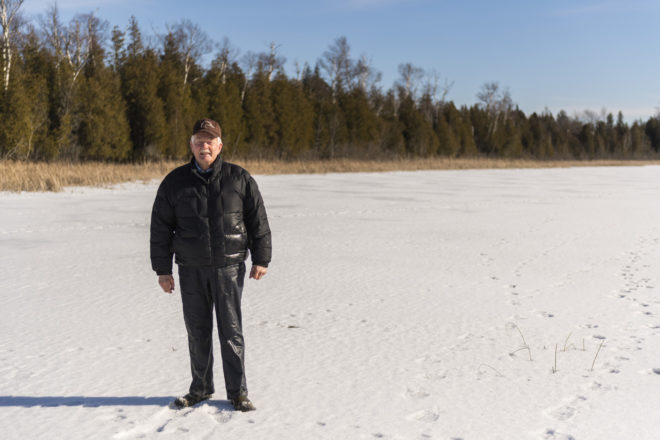 In this year’s Philanthopy Issue we bring you the stories of five people inspiring others in our community.﻿

Vital to that lifelong passion is his career in landscaping, most notably as owner of Meissner Landscape in Sturgeon Bay. It is a career that has provided him the knowledge, skills and connections to influence change in numerous volunteer conservation projects in Door County.

This volunteer work has taken him from his boyhood stomping grounds along Lake Michigan and the bay of Green Bay to Washington, D.C., where he has represented Ducks Unlimited in advocating for two federal conservation funding programs:  the Great Lakes Restoration Initiative and the North American Wetlands Conservation Act (NAWCA). The Great Lakes initiative provides funds to protect and restore the Great Lakes ecosystem while NAWCA provides matching grants to wetlands conservation projects in North America.

Meissner has been a staple of Ducks Unlimited for more than 40 years and is credited with helping establish its Sturgeon Bay chapter in the 1970s. His ongoing contribution of financial and volunteer support led him to be named the 2016 Ducks Unlimited Wisconsin Volunteer Conservationist of the Year.

But his work doesn’t stop there. Meissner is also an integral partner — through his involvement with the Sturgeon Bay Rotary Club and Doorland Preserve Limited — in two ambitious lake restoration projects in Door County:  Dunes Lake and Little Lake (also known as Bradley Lake).

His familiarity with both lakes, the changes that have happened at each, and his work along the shorelines have made him a significant resource in the volunteer efforts.

“We do a lot of environmental work in our business too — we’re working along the shorelines of Green Bay and Lake Michigan on a regular basis so there’s all types of environmental rules and regulations that need to be followed concerning wetlands, shoreland zoning, setbacks, things like that,” Meissner said. “…When you have an interest and you’re working in it, you gain a respect for what’s happening.”

Meissner has also served on the board and building and grounds committee for Crossroads at Big Creek, and serves on the County Deer Advisory Committee. He considers his environmental volunteer work to be a natural byproduct of his career.

“I know there are a lot of things that need help and that you can certainly give to but you have to, after awhile, focus your interest in one area that you are the most familiar with,” Meissner said.

At the center of it all is Meissner’s belief in the power of volunteerism in preserving Door County’s land and water for generations to come.

“It improves the sense of community…when people come up to Door County, when they see a nice clean environment, I think that becomes an invitation for them to come back,” he said. “…If you can keep the environment safe and livable, I think mankind is going to be better off because of it.”