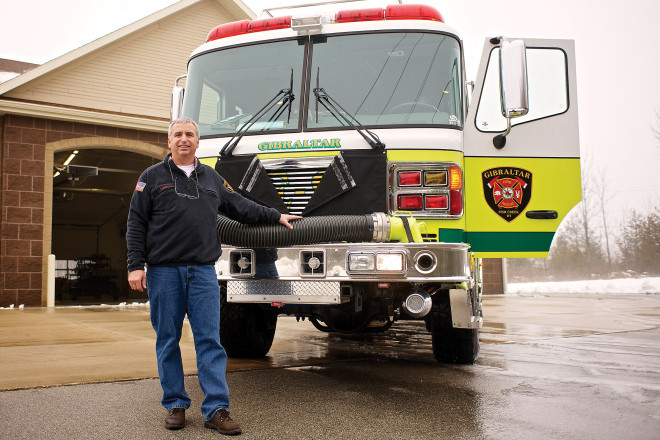 Greg Swain sits in the Sturgeon Bay office of his software company and makes a phone call to his Gibraltar Fire Department colleague Ward Merkel. “Hi, honey,” Swain jokes, and Merkel replies similarly from the other end of the line. After a short, direct conversation punctuated with laughter, Swain explains that he keeps in close daily touch with the other members of the department, letting others know when he will and won’t be available to answer a call. “Communication is critical,” says Swain.

Swain is in his sixth year as a volunteer firefighter and EMR (Emergency Medical Responder) for the township of Gibraltar, but his roots with the work go back to his young adulthood when he worked in the Sheriff’s Reserve as a dispatcher and EMT (Emergency Medical Technician).

“That work helped pay my way through college,” says Swain, who adds “and it’s also how I met my wife.” After college, Swain started his own company, Bay Lakes Information Systems, and started a family with his wife, Holly. “When my girls were little, I stepped away from it all,” he says, referring to his work with the fire and EMT departments. “My focus was my family and my growing business.”

That changed one day six years ago when his older daughter Megan received a concussion on the playground at school. “I came to school and was there with her, but she took a turn for the worse and we called for an ambulance.” First on the scene was Ward Merkel, a first responder, and Swain realized what an important role EMRs play in the community. “The next day, I called and said ‘it’s time for me to get back in here and get involved.’” Swain undertook his fire training, including his state certification, which was followed shortly by his EMR training.

Swain’s duties include mandatory weekly truck checks which test key equipment and keep responders fresh and familiar with ever-changing technology. It’s also a family affair. “Last night my daughter and I were at the station for an hour and a half, checking the truck and discharging a water pump.” Both of Swain’s daughters are involved in the Fire Explorers program, which enables youth to train with staff as well as perform low-impact work. “When my girls walk in to the station, they are welcomed like anybody else. It’s been a huge mentorship opportunity for them, because people in this department are anywhere from 18 to in their 70s. They’ve gained respect and learned respect.”

Swain is also heavily involved in recent efforts to create a fire district in northern Door County. He serves as secretary for meetings of the Fire District Exploratory Committee, as well as creating and maintaining a website for the project.

And, of course, Swain goes on calls. Last year Gibraltar, whose territory includes Peninsula State Park and the Ephraim Airport, as well as many of the small islands around the peninsula, received 101 fire calls and 170 EMR calls. All of these get answered with a small staff, which is one reason that the group enjoys such camaraderie. “There’s nothing I do that doesn’t rely on the fire department as a team,” says Swain.

Chris Hecht, Gibraltar Fire Chief agrees that the fire and EMT departments are like extended family. “We know each other not only on the call, but we know each other personally. Greg brings a calmness and thoroughness to everything he does. And he can connect and empathize with patients and patients’ families. That’s really important.”

Swain’s other philanthropic interests include donating his company’s hospitality software to hospitals and educational institutions, including NWTC. He and his wife have also worked with the DNR and the Door County Land Trust to put 80 acres of property near their home into conservancy.

But it’s the fire and EMR work that are Swain’s daily dose of passionate involvement. And like any volunteer worth his salt, he is a recruiter. “I would greatly encourage anyone who is interested in this work kind of work to get involved. You can do it, you can fit it in.”