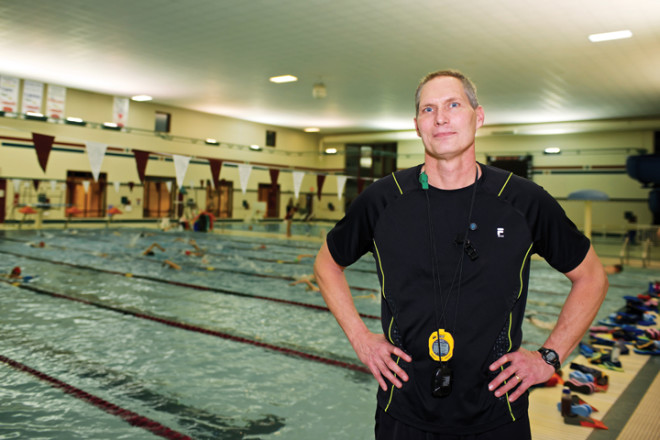 It’s a Tuesday afternoon, and YMCA Swim Coach Mike McHugh is standing at the edge of the upper deck, gripping the railing and watching closely as a few dozen young kids swim back and forth in the lanes below like dolphins. “They’re working on their butterfly,” he says, then heads down to give his swimmers direction, stopping to give a young swimmer an encouraging word.

Judging from the number of swimmers who are state qualifiers, a whopping 47%, McHugh’s formula for success has paid off handsomely. But according to McHugh, winning is not the motivating factor for his swimmers, who range in age from 5 to 18. “We don’t allow kids to compare themselves with others on the team. Our goal is for each individual to improve their time, and their technique. We talk about core values, and we set goals and expect that we’ll meet them.”

Jeff Norton, whose children Jacob, 8, and Katie, 6, are part of the team, says McHugh’s approach to coaching keeps the kids coming. “He uses a lot of positive reinforcement, he tells the kids what they did that was great, but he also shows them how they can do better.” The mutual support that kids and families offer each other is also a huge draw for Norton and his family. “Each swim family looks out for each other, and that all starts with Mike and his family.”

McHugh, who has been coaching swimming for more than 20 years, knows that the sport is one of the toughest around. “To do it, to really do it, you have to be an Olympian.” But he also consistently preaches, and more importantly, teaches that success in swimming is a direct result of how hard a swimmer works. “I don’t know a better lesson than that,” he says. “These kids show up, and the workout is hard, it’s painful. And they come back.”

In addition to being head coach of the Doorfins, McHugh teaches health and physical education at Sevastopol School. “Mike is a great teacher in the classroom,” says Elementary Principal Joe Majeski, “but he also does so much for the community outside of the classroom.” In his 20-plus years at Sevastopol, McHugh has coached track, shot put, and discus, and led Sevastopol to be the highest achieving school in the state in the Presidential Fitness Award winners for six of the last 10 years. “He’s also a key organizer for our big event, the annual Turkey Trot, and he works on a number of other fun runs throughout the county,” says Majeski. McHugh was instrumental in creating the school’s outdoor amphitheater as well as developing a nature trail and fitness stations. He also promotes annual student fundraisers for organizations such as the American Cancer Association, and – this is Wisconsin, after all –  he leads school-wide rallies for the Green Bay Packers.

McHugh has touched hundreds of swimmers, athletes, and students in his career. What keeps him going? He cites the incredible level of support from parents; he talks about the thrill of seeing a swimmer make it to nationals. “But seeing an eight year old come in fresh to the program, and then become a swimmer – that’s what shows you what you can get out of a kid if you do it well,” he adds with satisfaction.