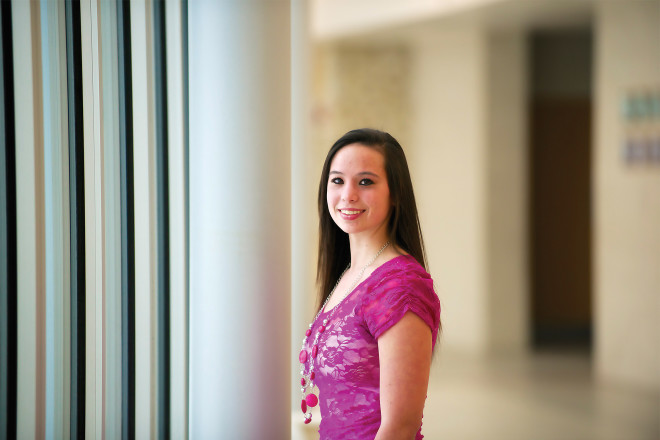 Eighteen-year-old Morgan Jandrin loves working with kids. “There’s always something new that happens,” she says. A senior at Southern Door High School, Morgan is enrolled in the elective Volunteerism course, through which she works at a nearby daycare center two days a week. But that’s just the beginning of her many community efforts.

Morgan is part of the first group of mentors in Southern Door’s newly minted Big Brothers/Big Sisters program. She meets with her “little,” an elementary school girl, every week to play games, talk, and just spend time together. “She always smiles and is happy to see me. She’s really talkative, and she tells me what’s going on in her life. She knows she can trust me,” says Morgan.

But Morgan also recognizes that volunteering is a deeply rewarding experience. “I look at it as more of a treat,” she says, “it’s always fun and interesting.” She describes how her “little” was determined to learn how to the play the game Clue. “I didn’t know how to play, and so we read the directions together and tried.” But her little sister must have gone home and practiced, because at their next meeting “she was determined to try again. She beat me twice!” laughs Morgan.

Patty O’Rourke, director of the Big Brother/Big Sister Program at Southern Door, says “Morgan is absolutely wonderful. She’s the kind of person who gives you confidence in her generation.” When she interviewed Morgan, O’Rourke knew that she’d be a perfect match for her “little.” “I thought to myself, these two are meant for each other!”

Morgan is also proud to be part of the new countywide initiative called Project 180:  a peer-led group in which members pledge to abstain from drugs and alcohol and plan alternative events for teens throughout the county. As one of Southern Door’s six teen leaders, Morgan meets monthly with leaders from three other Door County schools where they work on events such as the recent Root Beer Rave held at Sevastopol. Morgan also plans school-based dances and movie nights at Southern Door and visits eighth grade classes to reach out to next year’s freshman class and educate them about Project 180. “It’s been really cool to connect with the younger students. They come up to me and talk to me about things, and we say hi to each other in the halls.” “But it’s also been a challenge,” says Morgan, “because not everybody is willing to make the pledge.”

Morgan’s other involvements include the Southern Door softball and volleyball teams, forensics, a part-time job at Renard’s Cheese, and a role in the youth ministry program at her church. But finding time to volunteer with kids is easy for her. “I can just see in my little sister’s face that I’m making a difference for her.”

Morgan plans to attend UW-Green Bay in the fall of 2013 and major in Elementary Education. “I’m definitely planning on continuing my relationship with my little sister,” she says with a smile.