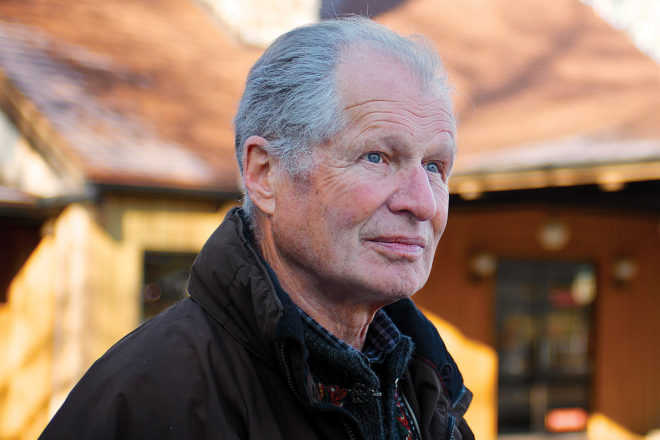 Dr. Peter Sigmann has 50 years of primary practice experience under his belt and has been volunteering at the Community Clinic of Door County since moving to the county in 2000. As he welcomes me into his office at the clinic, his eyes light up and he speaks gently but directly. “I retired from my practice earlier than I had to – a lot of primary care doctors do that because you end up taking care of insurance companies and their requirements, not patients,” he says. “Here,” he adds, gesturing around the modest room, “it’s just the opposite. We are taking care of patients, and we can concentrate on what’s truly important.”

Sigmann smiles and says that he took the “usual path” for arriving as a retiree in Door County. “We had a cottage and we would come up for the weekends, and invariably, after rain on a Sunday, it would turn out that Monday would be a beautiful day.” So Sigmann and his wife Jeannie, who volunteers as a nurse at the clinic, turned their cottage in Little Sturgeon Bay into their permanent residence.

Since then, he has not only remained on staff at the Community Clinic, but has also become involved in many aspects of conservation and land stewardship around the county. “When you retire, as you enjoy the fruits of your labors, you think more about the next generation,” he says. That thinking very quickly led to action on Sigmann’s part, as he realized that the unique ecology of Door County is what draws many people to the peninsula. “What we have here now is not necessarily to be taken for granted,” he warns.

Sigmann serves as President of the Little Sturgeon Property Owner’s Association and a board member of Door Property Owners, both of which aim to recognize “anything that threatens the environment, and act accordingly.”

“Right now, our focus is surface water, ground water, and unreasonable development,” he explains. For the past 12 years, Sigmann has been methodically monitoring the water quality in Little Sturgeon Bay, finding increased phosphate levels which have led to greater algae production. “I get a great amount of exercise shoveling algae,” he remarks dryly.

He is also a board member with Wild Ones of Door County, a group that encourages biodiversity through the promotion of native plantings.

Coggin Heeringa, director of the environmental learning preserve Crossroads at Big Creek, lauds Sigmann’s efforts, most of which are unsung. “He volunteers here, through the [Door County] Land Trust, and at Potawatomi Park doing buckthorn remediation and other invasive species work, and he does it on his own, quietly, without any need for acclamation,” she says.

Heeringa also admires the way in which Sigmann has systematically documented the changes in water quality in the bay. “He’s been instrumental in doing research on water pollutant levels, and he does it all with a scientific approach.”

For Sigmann, enjoying the fruits of his labors means biking, kayaking, and – in a winter with little snow – Nordic ice skating on Little Sturgeon Bay. His love of recreation mirrors his deep appreciation for the beautiful place that he now calls home, and his volunteer efforts join with those of so many others to keep Door County beautiful and fruitful for the next generations.

Looking to the future, Sigmann encourages others to contribute to the causes he holds dear. He urges retired physicians to consider getting involved in the Community Clinic. “I’m getting older,” he says, “and there needs to be somebody coming behind me.” As for getting involved in environmental work in Door County? “Do it,” he says. “You meet the nicest people.”