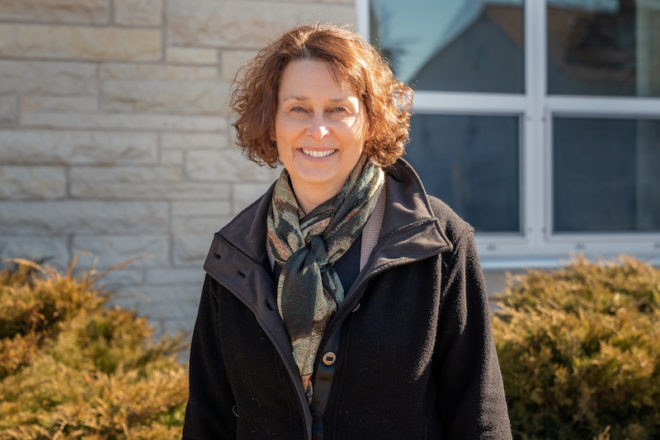 If there was a pandemic-preparedness meeting, live YouTube session or presentation anywhere within the county, Powers was there to explain the science, the safety protocols, the risks. She did this in a soft-spoken voice and patient manner that didn’t mask the frankness of her words.

“The only thing that’s changed is everything,” Powers said. “I can remember, if I really try, coming to work, doing what I needed to do, being kind of busy all day, but crossing things off the list and not being distressed about the workflow.”

Her quiet authority has been honed over the years as a public-health nurse. She joined Door County Public Health in 2006 and was promoted in 2018 to lead the department when the previous Public Health officer, Rhonda Kolberg, retired.

“I just absolutely love public health,” Powers said. “It’s so interesting. I knew right away within a few weeks it was the right mix for me.”

Still, public-health nurses don’t exactly fly above the radar as they work to build the overall health of the community, including underserved populations. Pre-pandemic, Powers perceived giving public presentations in front of elected officials as “harrowing and frightening” experiences. These days, her greater role has been to strike the proper timing, nuance, word choice and tone of voice to clear confusion, inspire action and soothe fear.

“My perspective has changed quite a bit,” she said. “I really want to give them the right information and tell them, from a public-health point of view, what’s important.”

Others used the pandemic as a crowbar to pry a politically divided country further apart, but for Powers, COVID-19 has been, and will always be, a public-health issue.

“Different people have wanted public-health orders,” she said. “I learned early on how that quickly becomes controversial and political, and I don’t want people to be focusing on that. I just want them to distance and mask and contain the spread.”

At this point, Powers has led her department with stamina and endurance during the longest public-health emergency this country has ever managed. And she’s done it without a manual.

Her department had always worked with communicable diseases and contact tracing, but never in the kind of numbers that could devastate a community. Before the pandemic, chlamydia — a common sexually transmitted disease — was the number-one communicable disease on the peninsula. The department also had Public Health Emergency and Incident Command training and templates, but none of it had been written for a global pandemic.

“Nobody could have possibly prepared enough for this,” Powers said. “I’ll give you an example. Right now it seems so clear, but for every single preparedness exercise we did, we all got together in a big room. Well,” she said, pausing. “That’s wrong.”

They took these missteps in the public eye. If people never knew before what they did or who was in charge during a public-health crisis, they do now.

State agencies write the rules and regulations for counties to follow. Those agencies are not nimble organizations even during normal times, so Powers and her crew were forced to develop their own procedures for tracking, processing and public reporting.

Meanwhile, their contact-tracing orders began to meet resistance from those within the population who distrusted the science behind their recommendations. That distrust was a new phenomenon for her department, as was the deluge of phone calls, emails and social-media demands.

“People parked their panic on us,” Powers said.

She didn’t take any of it personally — people were afraid, she said, and they were trying to navigate misinformation. Still, the stress of the workload and its pace took a toll on her department’s staff. Keeping them safe and well remained Powers’ top priority.

“Where I feel I made a difference is to help my staff get through this,” she said. “My job is to give them the tools, and make sure they can do their work, and make sure they stay well and support them. And I believe I’ve done a decent job at that.”

If Powers had a management maxim, it might be, “The whole is greater than the sum of its individual parts.” She passes the credit for her agency’s accomplishments on to her staff — “They are a group of brilliant women,” she said — and described Dan Kane, Door County Emergency Services director, as the de facto head of the Public Health Department. When pressed, she’ll take some credit, but still as only one of those individual parts contributing to the greater whole.

“I feel that Public Health in general has really helped the community collaboration,” Powers said. “This is a wonderful county for that. We live in such a good community for collaboration, but it’s really exponentially increased. I like to feel we’ve played a part connecting people and just working it out with each other. And it hasn’t always been easy.”