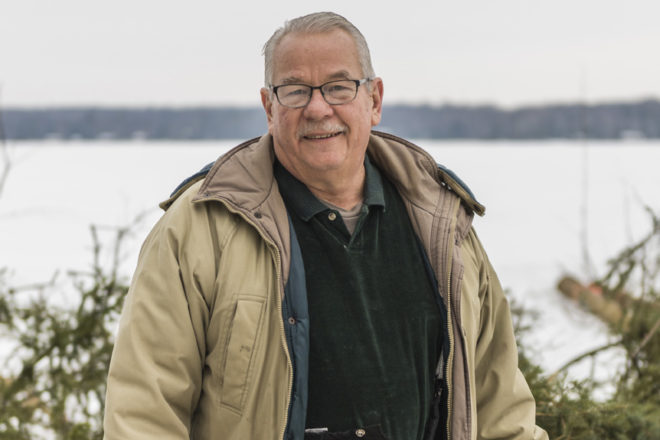 It’s easy to see the challenges facing the health of our lakes and see a problem too large. For many of us, the response is to throw up our hands and hope for the best.

Not Tom Schneider. When he joined the board of the Kangaroo Lake Association (KLA), he immediately sought a way to make a tangible impact on the lake he has loved since he first came to its shores with his parents in 1963. “I didn’t want to just talk about it and study problems,” he said.

His search led him to an innovative, yet relatively simple way to improve fish habitat in the lake through a project called “fish sticking.” Trees have been naturally falling into waterways forever, and those trees provide vital habitat, spawning grounds and shelter. Ninety-two percent of life in lakes originates at the shoreline, but as development moves in, habitat is moved out in favor of cleaner vistas and shorelines.

“We’re not going to change people’s love for the pristineness of the shoreline,” Schneider said, “but can we balance that? Can we put them at the ends of the property to achieve results when trees naturally fall into the lakes?”

Schneider wrote a grant to get $3,000 to launch a fish sticking project on Kangaroo Lake. In 2015, they acquired 15 trees up to 50 feet in length in a partnership with The Nature Conservancy. Each February, Schneider and a crew of volunteers drag trees onto the frozen lake and secure them to the shoreline to sink when it melts.

As of 2017 they’ve stuck 77 trees into the lake, creating vital new habitat for fish, spawning grounds, and plant life along the shore, and earning the KLA the 2016 External Partner of the Year Award from the Wisconsin DNR.

For Schneider, it’s a labor of love for the lake and future generations. He now owns the cottage where he came with his parents all those years ago, sharing it with his own children and grandchildren.

“Generally people are good,” he said. “Despite what you may think, not everybody is interested in just taking what they can get. Door County is such a gift to the people who come to it. We love this place, and we want to keep it for generations in the future.”