For their first year in the eight-man football division, the Gibraltar Vikings had a nearly perfect season. They finished their season at the Jamboree in Schofield on Nov. 3; they beat Luck 46-38 and finished with a 9-1 record.

Without a doubt, this was an outstanding season for Gibraltar. Along with the team success, individual players also had spectacular seasons and collected impressive stats. Most of the statistical leaders were the senior leaders and team captains: Austin Bauldry, Skyler Schopf and Nick Kita.

Quarterback Nick Kita, after taking his junior season away from football, came back as a senior to offensively lead the team. He averaged 69 points per game, the highest average in the state. He threw for more than 300 yards three times and once for more than 400 yards. These stats earned him the highest quarterback ranking in the state for eight-man football, and the third ranking in the nation. 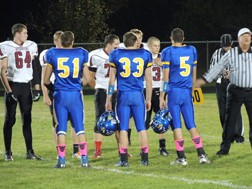 (Left to right) Senior captains Skyler Schopf, Austin Bauldry and Nick Kita at the coin toss for their last home game on Oct. 11.

Kita said, “This season was kind of magical. I didn’t really know what to expect going into the season, but I knew that we had a bunch of talent on the team.

“We started to feel like top contenders for the Jamboree when we started beating the teams that were undefeated like the Bowler/Gresham game. When we kept putting up points like we did, it made it easier to believe we were top contenders.”

Even though these statistical leaders will be gone by next season, the program is left in good hands. Kita had these final words of wisdom for returning players, “As long as they set their goals high and work hard for them, they will go out and dominate again. I have no doubt. They learned a lot from this season and from here out the sky is the limit.”