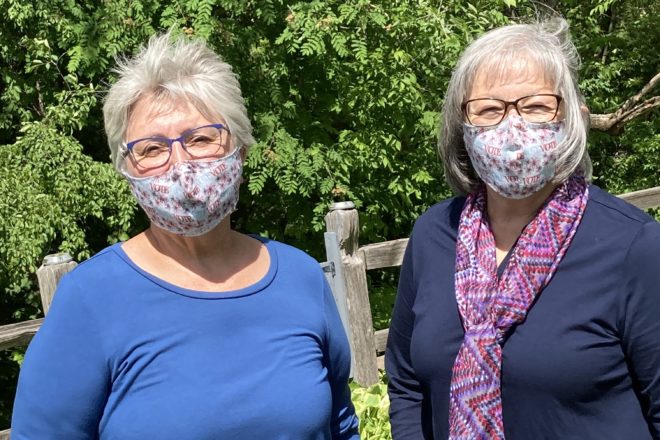 Sturgeon Bay – The League of Women Voters of Door County (LWVDC) announced that longtime Chair Shirley Senarighi completed her term July 1. She’s been a league member since 2007 and has served in a leadership role since 2008.

In light of COVID-19, a celebration of Senarighi’s service could not be held, but the LWVDC’s incoming chair, Pat Scieszinski; and treasurer, Sandy Brown, wore masks to honor Senarighi with a certificate of appreciation and an LWV pen-and-pencil set.

Following the brief event, Scieszinski said, “Shirley absolutely deserves a party with a standing ovation, and we wish we could do more to express our gratitude.”

Under Senarighi’s leadership, the league hosted a delegation from Azerbaijan that came to the United States to learn about local government. Other highlights of her term include hosting countywide forums on civility, which led to the creation of the Door County Civility Project and the expansion of membership to include high school students. The LWVDC also moved from a traditional governing-board model to one of shared leadership.

“Typical of Shirley’s cooperative, collaborative self, she is pleased to have others step into leadership,” Scieszinski said. Senarighi will remain active in the LWVDC and will continue the Door County Civility Project initiative.

“It has been an honor and privilege to serve on the leadership team of the LWV of Door County – an organization of men and women I deeply respect and share values with, an organization that works diligently to empower voters and defend democratic processes,” Senarighi said. “I strongly believe in the power and effectiveness of shared leadership and shared responsibility. The league has a place for everyone to contribute.” The LWVDC welcomes anyone as a member who supports its mission and is 16 years old or older.

Find out more at leagueofwomenvotersdoorcounty.org or the league’s Facebook page, or call 920.495.4206.