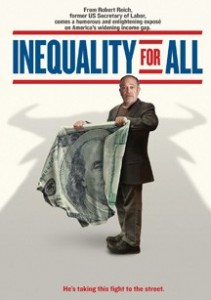 A free screening of Inequality For All, an award-winning documentary about income inequality in our nation and the way it has shaped our economy and democracy, will be shown at the Unitarian Universalist Fellowship in north Ephraim on July 15 at 4:30 pm.

Robert Reich (Secretary of Labor under Clinton, revered professor, charismatic pundit and author of thirteen books) guides viewers through the film, shining a light on the urgency of this issue. Economic imbalances are now at near historically unprecedented levels. Middle class incomes have stagnated or dropped over the same period during which the American economy has more than doubled. So where did all that money go? The facts are clear – it went to the top earners. The last time wealth was this concentrated was in 1928, on the eve of the Great Depression.

The issues addressed in this film are arguably the most pressing issue of our times. The film alternates between intimate, approachable sequences and intellectually rigorous arguments helping people with no economic background or education better understand the issues at stake. Inequality For All allows viewers to start with little or no understanding of what it means for the U.S. to be economically imbalanced, and walk away with a comprehensive and significantly deeper sense of the issue and what can be done about it.

The film is part of the monthly Movies That Matter series examining a wide range of issues. The UU Fellowship is located at 10341 Hwy 42 in north Ephraim. For more information call 920.854.7559.