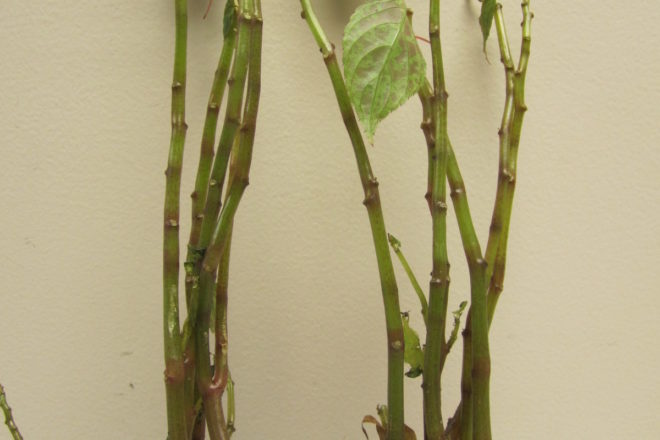 Impatiens are an annual garden plant that is quite popular because of the wide range of brightly colored flowers, shade tolerance, and ease of care. Borders along garden beds and backyard decks are often brought to life by these flowers. Typically impatiens will bloom throughout the summer until they dieback with the first frost. However, this year, some homeowners noticed their impatiens have been reduced to just stalks…and this was definitely before a frost.

After your first inspection of the dying plants, you may have concluded that some animal came through and cleaned off the leaves or that a caterpillar munched off all the foliage. However, if any leaves are left, pick up one and look at the back of the leaf. If you see small white flecks that almost look like dust, then your plant likely has impatiens downy mildew, a disease that is causing problems for anyone growing impatiens worldwide.

In order for a disease to develop, three things must always happen: 1) the pathogen must be present, 2) there must be a susceptible host, and 3) the environmental conditions must be favorable for that pathogen to thrive.

The pathogen that causes impatiens downy mildew is a fungus-like water mold called Plasmopara obducens. It will infect standard garden impatiens, balsam impatiens, as well as native jewelweeds. Being a water mold, the pathogen thrives in highly humid, cool conditions (59-73°F). With all the rain we had this year, environmental conditions have been near optimal.

The pathogen is first commonly introduced into a garden via infected impatiens transplants or seeds. Windborne spores can also introduce the disease. Once in a garden, the water mold can survive in the infected plant(s), within the soil or potting mix, or in seeds produced by the diseased plants. Early symptoms of the disease include a very slight yellow-green discoloration on leaves near the tips of the branches; damage that can often be confused with spider mite feeding. Often those diseased leaves will curl downward. During the summer, the plant may be stunted and produce less flowers. Eventually, all the leaves and flowers will fall off leaving bare stems and the plant will die. Impatiens showing any of these symptoms should immediately be removed, placed in a sealed plastic bag, and put into the garbage. Surrounding plants/roots should also be removed in about a three-foot radius around the diseased plant. Diseased plants will not recover and will only provide additional inoculant the following year.

Once impatiens downy mildew has appeared in your garden, it is very difficult to control. If you haven’t found the disease yet, the best control is to carefully inspect all transplants and only purchase disease-free seed. Even if the plants look disease free, when you bring them home don’t plant them right away; keep them in an isolated area for up to two weeks and check them for symptoms that may develop over that time. In your holding area, keep the plants far apart so if one is infected there is less of a chance that the disease will spread. If the plants pass your test, you can go ahead and plant them.

It is also very important to not plant impatiens where you planted them last year. The pathogen that causes the disease can survive in the soil, so it can re-infect plants the following season. Good spacing between plants also can help leaves to dry, so environmental conditions are not as favorable for the pathogen. Likewise, do not use overhead watering so that the leaves aren’t wet and soil won’t splash onto the leaves. As a very last resort, there are some fungicides that are labeled for control of impatiens downy mildew; however, fungicides will keep a plant from becoming infected but it will not help salvage an already-infected plant. As with any fungicide, make sure to read the entire label before use since the label is the law.

If your impatiens died this year, your best option is to plant something else for a few years. You could consider planting the more disease tolerant/resistant New Guinea impatiens. Also, alternanthera, begonia, coleus, iresine and torenia are all possible alternatives to impatiens. Other plants in the landscape that are not related to impatiens will not be affected by this disease.

After reading this article, if you are starting to wonder if your impatiens died this year from a disease rather than your green thumb turning brown, as you plan for your garden next summer consider trying some other types of plants to keep your garden colorful all summer.