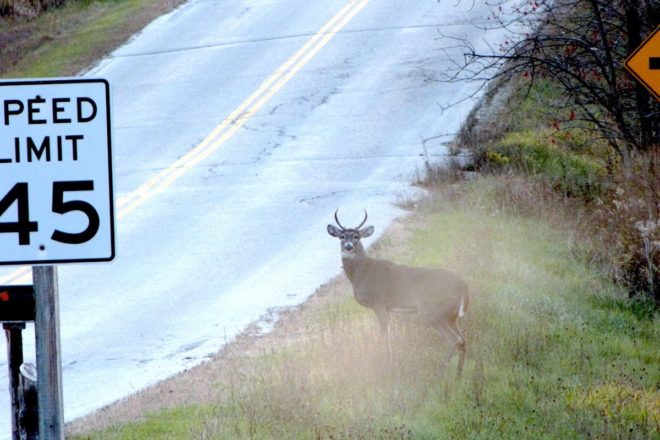 Motorists will need to be increasingly vigilant during the coming weeks as whitetail activity peaks prior to and during the annual deer-mating season. Young bucks are already on the move, but most chasing takes place during the first two to three weeks of November. Photo by Kevin Naze.

If you’re an avid deer hunter, we’re entering the season you’ve waited all year for.

Whitetail buck activity is picking up and will peak during the next four to five weeks as they seek out mates. Colorful leaves are falling, opening the woodlands. Even better, a hard frost last weekend took care of most mosquitoes.

Pre-rut action is underway, including antler-rubbing on trees and shrubs, shoving matches as bachelor groups break up, and hoof-thrashed scrapes under tree limbs from bucks marking their territory.

When the wind is right, you might try tickling some tines together – otherwise known as antler rattling – to see whether you can lure a buck. Grunt calls and decoys can also be effective at times. If you got on stand without being detected and have a mature buck bedded within hearing range, rattling or grunting could bring him close to look for what he thinks is a competitor. You’ll need to fool his nose, too.

Some lucky hunters in Wisconsin will shoot a giant buck during the next week or two, but for every mid- to late-October doe being tailed by a trophy, most aren’t ready to breed until early to mid-November. Year in and year out, the best chance to see a trophy whitetail is between Halloween and opening weekend of the gun hunt, when even the most nocturnal old warriors may be on their feet looking for love.

There’s no cost to donate, but your deer must be registered and the complete carcass turned in (head and antlers may be kept). Be sure to write down your registration confirmation number after the harvest because you’ll need it to fill out the donation log sheet.

It’s a good idea to call ahead to make sure the processor has space to accept your deer, and some locations take deer only during the gun season.

This is the 20th year of the state Deer Donation Program, though Paul’s Pantry ran one called Hunt for the Hungry prior to that. Including that effort, more than 100,000 whitetails have been donated by hunters to help feed individuals and families in need.

The first confirmed human case of West Nile virus in Wisconsin in 2019 struck close to home.

Due to privacy laws, the Wisconsin Department of Health Services could not provide any details about the patient, but communications specialist Jennifer Miller said the person is from Manitowoc County.

“It’s not known whether he was bitten there or in another county,” Miller said. “The bottom line is that people should protect themselves from mosquito bites wherever they are.”

West Nile virus cannot be spread from person to person. Mosquitoes get the virus by feeding on infected birds. Most human cases occur during late summer, but the risk is there whenever mosquitoes are active.

The chances of a person contracting the virus are very low, and most people who are infected do not get sick. Those who do become ill may develop a fever, headache and rash that lasts a few days. Symptoms typically begin between three to 15 days after being bitten by an infected mosquito.

The DNR held a public meeting Oct. 15 at Crossroads at Big Creek to discuss the smallmouth bass fishery in the waters of Lake Michigan and Green Bay surrounding Door County.

The meeting allowed DNR staff a chance to engage stakeholders and present information from recent surveys and other research. Anglers could ask questions and comment on what they’d like to see in future bass-fishing regulations.

Door County’s smallmouth bass fishing is among the best in the Midwest. Four- and five-pounders are not uncommon, and some incredible six- to eight-pound fish have been weighed in professional tournaments here.