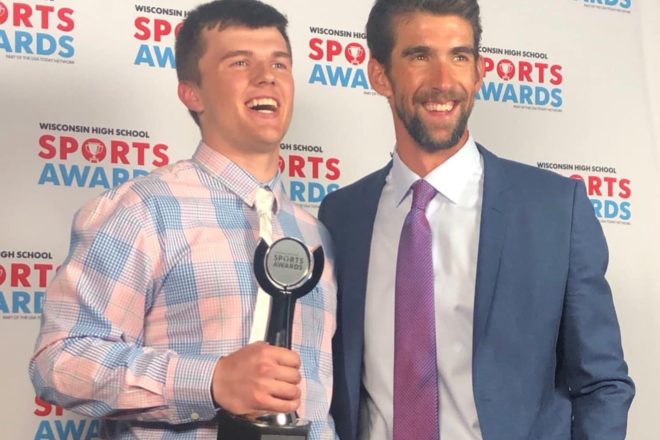 (From left) Derik LeCaptain poses with Olympian Michael Phelps after LeCaptain earned the Boys Athlete of the Year honor at the Wisconsin High School Sports Awards ceremony on May 8. Submitted.

“When my name was called, it felt great,” LeCaptain said. “Our state is full of great athletes, and to be recognized as one of the best is an honor.”

As a forward on the basketball team, LeCaptain scored 13 points, grabbed 6.7 rebounds, dished out 4.2 assists and grabbed 1.8 steals per game for the Packerland Conference champions. LeCaptain has also been a three-time All-Conference performer in baseball.

“I would say that Derik is without question in the top three as far as greatest athletes to come out of Door County,” said Derik Hawkey, LeCaptain’s basketball coach. “His records and accolades, in combination with the type of leader and person he is off the floor, make him – without question – the greatest athlete I have had the privilege to be around in my player and coaching career.”

LeCaptain will continue his football career this fall as a preferred walk-on at the University of Minnesota.

“I am super excited to get to school,” LeCaptain said. “I’m jacked to put in work with the boys and for us to have a great season.”