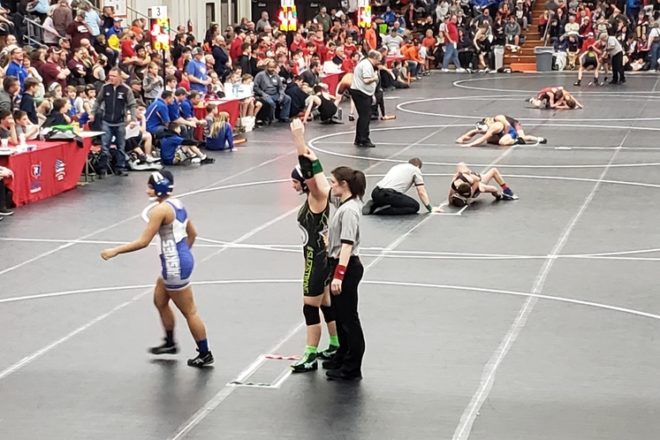 Coming out strong in her first match, she used a Peterson roll to pin Nayeli Garay, who was ranked fourth in the state at 138. That win secured LeCloux a podium finish. The second match was against Joette Kassa, who used upper-body Greco-style moves to win by pin over LeCloux ‪at 2:14‬. From the starting whistle in the third match, McKensie Clemetson was going for the head, looking for a throw. LeCloux was able to duck out several times and was ahead 5-4, but a last-minute catch turned a pending win into a loss by pin ‪at 2:45‬.

Facing Garay again in the final match, LeCloux came out with a slide-by for a take-down, got three nearfall points on a tilt and was ahead 5-0. At the end of the second period, Garay got a reversal and three nearfall to tie the score. Garay won at the the end of the third with a questionable, last-moment nearfall.

A solid competitor in all of her matches, LeCloux has proven she has the skill and grit to compete, despite battling injuries during the regular season and having fewer matches than many of her competitors. She wrestled well, considering the time missed during the regular season, and we hope next year will give her another opportunity to boost her strength and gain traction in the women’s state rankings. Well done, Katelyn LeCloux: our first Southern Door women’s state high school wrestler!