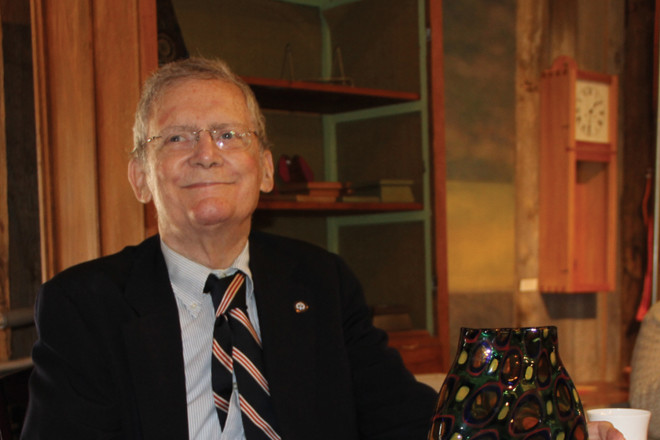 Through his exceptional generosity of money and time, Lee Traven has developed a reputation for good deeds around Door County.

And, at Scandia Village Good Samaritan retirement community, where he now lives, he has developed a reputation for connecting people. Scandia Senior Housing Manager Lynn Mattke said he has proven to be a vital human resource, planning and participating in many Scandia events.

“Lee has a great talent for bringing people together,” Mattke said. “He’s taken responsibility here, and we’ve really appreciated that.”

It’s that trait and Traven’s life-long generosity to the peninsula as first a visitor and then a retiree that earned him the 2011 Door County Community Foundation’s Philanthropist of the Year Award.

Community Foundation Director Bret Bicoy called Traven “a driving force in the peninsula community,” in bestowing the honor upon him.

Born in Milwaukee, Traven grew up in Baileys Harbor before leaving for college at Lawrence University. He served four years in the Air Force during the Korean War before going to graduate school at Columbia University, which led to a career working for Standard Oil in New York.

Though Traven returned to the peninsula regularly in the summer, he led an extremely active life in New York City, working with various professional societies as well as his church board and an interfaith council that did work for disadvantaged youth on the Upper East Side of Manhattan.

“One of the things that serving on this interfaith board in Manhattan did is that it gave me a great awareness of the importance of people giving something back, if they can, to their community, to the various organizations that benefit children and poor people,” Traven said.

Upon retirement, Traven decided to return to Door County, armed with that social awareness. Since his return Traven has become one of our community’s great philanthropists. He has donated time and resources to The Clearing, The Ridges Sanctuary, the Door County Memorial Hospital Foundation, and the Lawrence University/Downer Alumni Board, among many others.

Traven loves doing the work that he does, but is grateful that he’s not the only one around to do it.

“We have some great people here on these boards that are just invaluable,” he said. “We have a wealth of resources in people, I think, who are caring and responsible.”

One of the best of them is Lee Traven.

This article was adapted from Katie Dahl’s profile of Traven in the 2010 Philanthropy Issue of Door County Living magazine.