This article appeared in the 2010 Philanthropy Issue of Door County Living magazine. Yesterday Lee Traven was named the Door County Community Foundation’s Philanthropist of the Year.

Lee Traven was eager to meet me for an interview one Wednesday morning in September [2008], but his time for conversation was limited. By the time he and I met at 9:00 am, Traven had already finished a meeting with one of the many committees on which he serves, discussing the ways in which the sudden economic crisis would affect the organization’s endowment. And after we finished, Traven had a full afternoon ahead of him, including participation in a poetry gathering and a mystery book club. 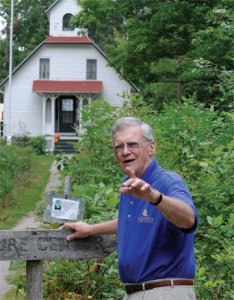 Lee Traven at the Ridges Sanctuary.

It’s no wonder that Traven’s life remains busy even as most Door County residents are slowing down for winter: he’s been building his network in the county ever since growing up in Baileys Harbor in the 1930s. Though he spent much of his adult life far from the peninsula, he has developed a reputation for extraordinary dedication to and involvement in his home community.

Born in Milwaukee in 1931, Traven’s family moved to Door County when he was five and the country was in the depths of the Depression.

“We didn’t have a Dust Bowl here,” Traven says, “but people were moving anyway, because they were losing their jobs in metropolitan areas. My mom and her sisters had inherited a house in Baileys Harbor from their aunt, so that’s where we moved to and made it livable.”

Traven, an only child, speaks fondly of his childhood even as he acknowledges the difficulty of the times. “I lived right next to schoolhouse in Baileys Harbor,” Traven remembers. “That was nice because you could come home if you wanted, but I wanted to bring my lunch to school anyway, to be like the other kids.”

Though Traven’s day-to-day life was unremarkable in that era, his roots stretched remarkably deep into Door County history. Traven’s maternal great-great-grandfather, Moses Kilgore, had moved to Wisconsin from Maine in 1860 and had become the first person to represent Door County in the state legislature. His accomplishments included planning Highway 57 and County Road E and organizing a wagon to shuttle passengers and mail between Green Bay and Ellison Bay.

“We’re very proud of him,” says Traven, who has visited the Kilgore home in Maine as well as the family’s ancestral home in Scotland.

The family’s tradition of civic engagement did not stop with Kilgore. Traven’s mother, Olivia, learned to love Baileys Harbor while visiting her grandmother as a child and integrated herself swiftly into the community upon moving there as an adult. An articulate, intelligent woman, she was asked to serve on many different committees throughout her lifetime. As part of the Baileys Harbor Women’s Club, Olivia Traven became one of ten co-founders of the Ridges Sanctuary—an accomplishment she later called one of her greatest legacies.

Traven’s father, Fred, was also quite active in the community, serving as a Boy Scout leader for 28 years and later serving as president of the Ridges. Having attended commercial artists’ school in Detroit, Fred Traven made his living in Door County’s growing tourism industry; upon his arrival in the county, he was the only sign painter in the area.

Though neither of Traven’s parents attended college, they insisted that their son seek out a high-quality education.

“In my case,” Traven says, “my dad was a very important person. Without him, I wouldn’t have gone to university or anything. When I finished my Master’s, my dad asked, ‘Aren’t you going to go for your doctorate?’ He was always very giving.”

Traven attended Lawrence University in Appleton as an Air Force-ROTC member, majoring in government and history. “I thought then that I would go to grad school, but then the [Korean] war came along,” Traven says. So he embarked on four years in the Air Force, serving in California, Texas, and Japan. “It was really a great experience for me,” Traven says of his time in the military. “I got interested through that in travel, and I’ve done quite a bit of travel since.”

After leaving the Air Force, Traven attended Columbia University on the GI Bill, earning an M.B.A. and an M.A. in international relations. He became particularly interested in business intelligence, the practice of gathering information for a company about its competitors, allies, and potential for expansion.

Though he didn’t come to New York City intending to settle there, Traven ended up living in New York for 38 years, landing a job in business intelligence for Standard Oil of New Jersey (now Exxon Mobil).

“So I stayed in New York all those years, never thinking I was going to stay when I went there. Things changed in grad school, and I grew to like New York very much—I liked to go to the symphony and the opera and museums.

“I’m glad I traveled and lived in New York,” Traven says. “I think it was very good for a young person to get out and see other areas.”

Though Traven returned to the peninsula regularly in the summer, he led an extremely active life in New York City, working with various professional societies as well as his church board and an interfaith council that did work for disadvantaged youth on the Upper East Side of Manhattan.

“One of the things that serving on this interfaith board in Manhattan did is that it gave me a great awareness of the importance of people giving something back, if they can, to their community, to the various organizations that benefit children and poor people.”

Upon retirement, Traven decided to return to Door County, armed with that social awareness and prepared to continue his parents’ legacy of community involvement. Since his return, he has served on numerous boards, including the Hospital Foundation, Scandia Village, the Clearing, Wisconsin Public Radio, the Ridges, and the Lawrence/Downer Alumni Board.

Through his exceptional generosity of money and time, Traven has developed a reputation for good deeds around the county. Lynn Mattke, Senior Housing Manager at Scandia Village in Sister Bay, where Traven now lives, says Traven has proved to be a vital human resource for the retirement community, planning and participating in many Scandia events.

“Lee has a great talent for bringing people together,” Mattke said. “He’s taken responsibility here, and we’ve really appreciated that.”

Traven loves doing the work that he does, but is grateful that he’s not the only one around to do it. “We have some great people here on these boards that are just invaluable. We have a wealth of resource in people, I think, who are caring and responsible.”

So while he plans to continue his involvement in the community his parents taught him to love, Traven hopes that others will join him in working to improve the Door County community.

“Just this morning,” he says, “they were starting a men’s club at the Meadows. I was having a computer class, so I almost missed that meeting, but when I got there, people said, “Oh, good, Lee Traven is here; he knows people.’ And I like to do that kind of thing, but you can’t have just one person. It vitalizes it if you have others.”