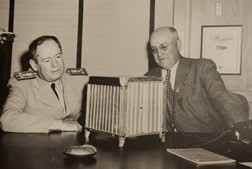 Leathem D. Smith wasn’t looking to revolutionize an industry; he simply wanted a more efficient way to transport rock from his family’s Sturgeon Bay quarry down Lake Michigan to Chicago.

The problem would inspire the Tunnel Scraper System patented by Smith in 1920. The new system was a cheaper and more efficient self-unloading system for ships at a time when belt conveyors were then the norm. With the Tunnel Scraper System, doors in the ship’s hold opened so that bulk cargo could fall into tunnels below, where dragline scrapers would drag the cargo to a conveyor belt that carried it to the dock.

It shortened the time required to unload a giant cargo ship from two or three days to just hours, and the scraper system took up less room than previous equipment, increasing cargo space.

Old ships could also be converted to incorporate the scraper system at half the cost of building a new one – then close to $500,000 – and Smith’s shipyard capitalized on this, as well. Converting 14 ships into self-loaders kept Smith’s shipyard in business through the 1920s and allowed him to weather the stock market crash that triggered the Great Depression. It also provided year-round work for more than 200 men in a short-season agricultural community. 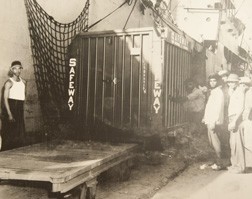 One of Leathem Smith’s Safeway Shipping Containers being unloaded at a foreign port. Photo courtesy of Door County Maritime Museum.

The prominence of Smith’s shipyard during World War I helped Sturgeon Bay obtain federal funds for a hospital, apartment buildings and a bus service – proud accomplishments for the quintessential local boy who made good. Born in Sturgeon Bay in 1886, Smith graduated from the University of Wisconsin – Madison in 1909 with a degree in civil engineering and went to work in his father’s lumbering, quarrying and shipping businesses, spending his entire life in Sturgeon Bay.

During World War I, Smith revived the shipyard that was part of the family’s towing and wrecking company with contracts for nine 100-foot wooden tugboats for the U.S. government. After the war, he oversaw a massive expansion of the family-owned quarry (now the Olde Stone Quarry County Park) into one of the largest in the region.

Those improvements didn’t end with the scraper system. In the early 1940s Smith began toying with an idea for a uniform shipping container. The Safeway Shipping Container, a 7’x9’x7’ rectangular container, was designed to be stacked four high. The standardized container would revolutionize the shipping industry yet again, allowing for easy transfer of goods from ship to rail or truck lines. Smith also designed a ship to accommodate a maximum number of the containers, based on the plans for a cargo hauler his shipyard had built for the Army. 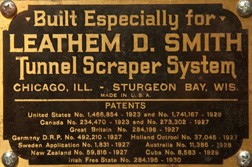 Sadly, Smith would not live to see the impact of his latest innovation, and ironically, it was the lake that took him. Smith and three others drowned when a sudden storm on Green Bay capsized his sailboat, the Half Moon, as it returned from a regatta in Marinette.

After his death in 1946, the Leathem Smith Estate negotiated with the Dravo Corporation of Pittsburgh to sell the licensing rights for the Safeway Shipping Container. After months of negotiations, during which the estate sent them customer lists, blueprints, profit figures and other records, Dravo rejected the sale and began producing the containers on its own.

The Leathem Smith Estate filed suit against Dravo in 1949, charging a breach of confidential relationship and patent infringement. The case, a landmark in the legal handling of trade secrets, wasn’t resolved until 1954, when Dravo agreed to pay royalties to the Leathem Smith Shipbuilding Company for 10 years, but by that time the local company had been sold, and the Safeway Container Division was defunct.

Today, Smith lives on in name at the Lodge at Leathem Smith on the shore of the Sturgeon Bay Ship Canal and in his impact to the ships on the waters of the Great Lakes.

The Lodge at Leathem Smith, one of Door County’s most iconic properties, is set to return to its former days of grandeur and assume its role as one of the county’s finest resorts and fine dining establishments.

Established in 1922 as the county’s first country club, the property on Memorial Drive in Sturgeon Bay was purchased by shipbuilding magnate Leathem Smith in 1930 and renamed the Commodore Club. In 1937 Smith was forced to sell the resort to the Bertschinger family to save his other businesses in the midst of the Depression, but seven years later he repurchased it with profits from World War II shipbuilding.

Over the next 65 years the lodge had four owners, two name changes, was foreclosed and condemned, saw its golf course split in 1978 by the Bayview Bridge, and received major renovations in 1993 before falling into receivership in 2007.

The historic property, restored to its past glory, will re-open June 17 as The Lodge at Leathem Smith under the ownership of Paul and Holly Meleen, who also operate Meleen Sport Center in Onamia, Minn. Paul, a professional fisherman, was named Angler of the Year in 2010 by Forrest L. Wood Outdoors. He was also trained at the Culinary Institute of America and specializes in the preparation of fish.

“We are restoring the historic value of this iconic property,” Paul says, “and combining it with 21st century amenities.”

The 63-room hotel, bar and banquet hall are the first areas to be completely refurbished. Chef Andy Mueller will work in conjunction with Paul to create the new menu. Accommodations include a wing catering to fishermen and 18 elegant suites with hot tubs and two-sided fireplaces. Fine-dining facilities are expected to be open by the July 4th weekend, when Paul expects to double his current staff of 30.

The marina that was part of the original resort was recently purchased by Chris Jeanquart; one of Paul’s fishing tournament buddies. The restoration also signals a return to the lodge’s role as a favored site for elegant social events. Jerri Runquist, Paul’s administrative assistant, reports that bookings for weddings, corporate events and banquets are already on the calendar. A mixer with local business people, co-sponsored by the Door County Visitor Bureau, will launch the season June 16.