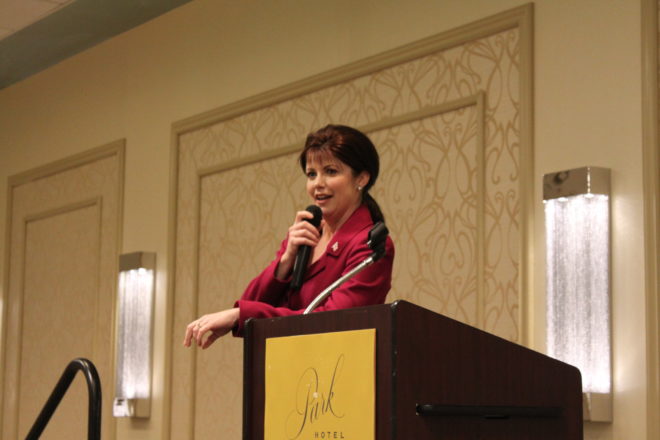 After a day of meeting with state agencies and legislative lobbying during Door/Kewaunee Legislative Days, Lieutenant Governor Rebecca Kleefisch joined the delegates for their evening reception featuring food and drinks from throughout the peninsula. Kleefisch delivered a well-practiced speech on some of the goals of Gov. Scott Walker’s 2017-19 budget proposal, a speech she has given to many groups since Walker released his proposal in February.

“The legislators with whom you spoke today now have the ability to finesse the budget,” said Kleefisch. “We are really investing in you to assist so you all can hire the folks that you have to hire in order to succeed. We want to make sure you can meet your customer need.”

Kleefisch’s 15-minute speech tapped into her days as a news anchor for ABC in Milwaukee. A charming personality and comedy flowed through what some in the state see as controversial budget measures. Overall, Kleefisch explained that now the jobs are here, we just need the workforce.

“Now that we have implemented some neat changes our challenge has reversed itself,” said Kleefisch, reciting unemployment numbers from the 2008 financial crisis. “Today we have come roaring back… You realize that we have a challenge that is actually the opposite of the challenge that we were dealing with when the Governor and I first got these jobs.”

Wisconsin’s unemployment rate is 3.7 percent. Since it’s typically a good thing to have some open jobs and people searching for new employment, most labor economists call 5.5 percent the ideal full employment. Anything below 5.5 percent verges on a workforce shortage, which many businesses in Wisconsin, and Door County, have felt.

“Therein lies our challenge,” said Kleefisch. “We need to train up our next talented, ethical, educated employees and this budget does exactly that.”

Kleefisch primarily focused on Walker’s planned investment in education as the primary means to train future employees. Walker has consistently proposed cuts to education in his past budgets, succeeding in some cases. The amount he is investing in Wisconsin schools now is a divergence from earlier in his administration.

“About 50 percent of new Wisconsin jobs are going to require more than a high school diploma but less than a traditional bachelors degree,” said Kleefisch, adding that Walker’s budget freezes tuition at technical colleges.

Walker’s budget also freezes tuition at the University of Wisconsin System in the first year of the biennial budget while reducing tuition by five percent in the second year. An added $135 million in funds for the university system makes up for a little more than half of the $250 million that was cut in the 2015 biennial budget.

“We want to make sure that talent pipeline is flush with those educational opportunities,” said Kleefisch.

The administration’s hope of improving the workforce extends beyond education and into training those who may have not have easy access to schooling.

“We want everyone who can be in this economy to get in there, we need to get them the training they need,” said Kleefisch.

This includes a controversial proposed change to the welfare program, requiring parents of school-age children to work or participate in work training programs in order to receive aid.

Kleefisch said the proposed changes would create parents who exemplify a strong work ethic for their children while getting them into the workforce and off state aid.

Opponents to the change say that it would reduce aid for thousands of parents struggling to keep themselves and their dependent children afloat. Some say imposing new work requirements violates federal law and the Walker administration has said it will seek a waiver from this law from the Trump administration.

“In Wisconsin, we really didn’t invest in our savings account at all, then came the recession,” said Kleefisch. “The rainy day fund is 178 times greater than it was when we took office. Ultimately, I think it’s just greater as a policy commitment than it ever was.”

The Lieutenant Governor wrapped up her message with some direct messages toward Northeast Wisconsin, commending the region for its role in the state economy.

“In Door and Kewaunee counties, you mange to roll out the red carpet to visitors in Wisconsin,” said Kleefisch. “When they consider the future, they think fondly of our state because of the experience that you have given them.”