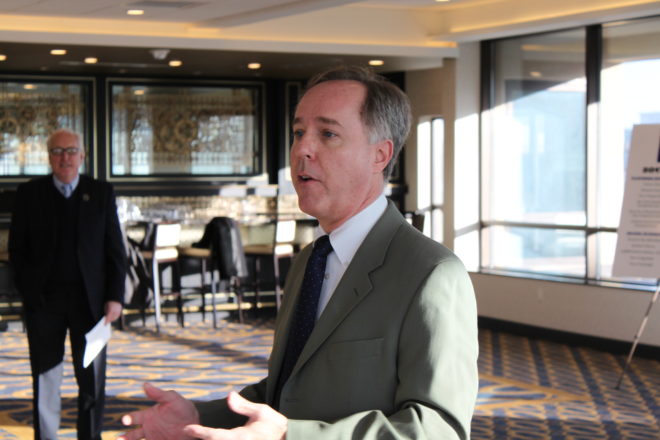 In a short address to delegates during breakfast on April 6 at Legislative Days, Speaker of the House Robin Vos said he agrees with fellow Republican Gov. Scott Walker on almost everything, just not transportation funding.

“Our roads are going to hell, you’re right,” said Vos in response to a question from a delegate. “[Walker’s] plan is irresponsible… It’s only digging yourself a deeper hole.”

“It’s a bipartisan problem,” said Vos. “There’s lots of blame to go around. Rather than increasing the amount of revenue we’ve just increased our borrowing. Now 25 cents of every dollar just goes to our debt service and that is increasing. There’s this blind spot that [Walker] just has and I don’t understand it.”

Walker has been vehemently opposed to any tax or fee increases to support the transportation budget, but Vos said everything is on the table. Vos has previously stated that the legislature will look at increasing the gas tax, registration fees or other revenue sources to build a “pay as you go” funding method for roads.

“We cannot grow our economy if we don’t have a good transportation system,” said Vos. “I’m trying to fight as hard as I can but it’s not easy to fight the Governor.”

The transportation funding problem has forced the delay of many projects, most recently for I-94 in Milwaukee. With many Door County communities poised to begin their own highway resurfacing, it is still unclear how this funding method will affect the future of those projects.