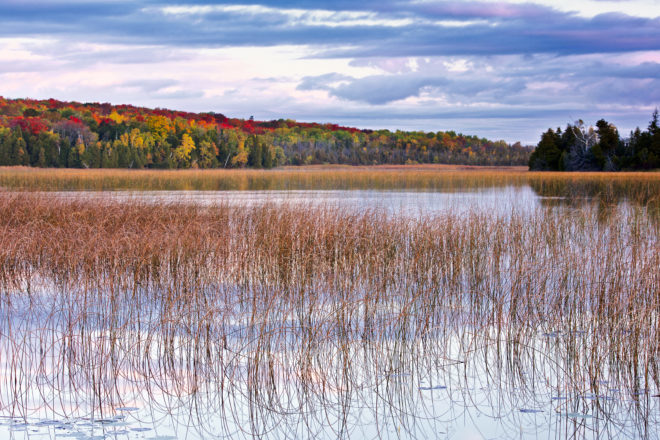 Much of the land north of the causeway on Kangaroo Lake was purchased with the help of the Knowles-Nelson Stewardship Program. Photo by Len Villano.

Land-acquisition program would get first long-term boost since 2001

A bill in the Wisconsin Legislature seeks to extend the Knowles-Nelson Stewardship Program through 2030. In Door County, the program has helped to purchase significant portions of the Mink River Estuary, Three Springs, the northern section of Kangaroo Lake and many other properties, opening them to public access.

The Knowles-Nelson Stewardship Program uses authorized debt to purchase land to expand recreational opportunities. Since the program began in 1989, the Legislative Fiscal Bureau has reported land acquisitions amounting to 669,000 acres.

The program limped through the 2010s, consistently facing funding cuts and elimination while never receiving more than two years’ worth of funding at a time. Former Gov. Scott Walker proposed freezing the fund in 2015. Gov. Tony Evers’ budget proposal kept the program alive for another two-year period at existing funding levels. This proposed eight-year reauthorization, which would begin after the existing budget expires in 2021, would be the first long-term funding of the program since the 2001-10 period.

Rep. Joel Kitchens is a co-author of the bill. He was skeptical of Evers’ plan for another short-term reauthorization.

“I have no idea why he did that,” Kitchens said. “He did not propose reauthorizing it for 10 years. It’s not going to get done if we don’t get on it right now.”

Evers did express a desire for a long-term funding solution for the program in his budget proposal but has not explicitly put forth a plan.

Stewardship funds have been used to acquire land in what are now some of Door County’s largest and most popular parks, but some residents in the northern part of the state have viewed the land acquisitions as state overreach.

“In the Northwoods, where a lot of land has been taken off of the tax rolls, people are less receptive,” Kitchens said.

During development of the current budget, Sen. Tom Tiffany, who represents a large portion of northeast Wisconsin and the forests surrounding Rhinelander, said the state should “take a time out” on funding the program.

To address some of those concerns, the bill includes a cap that prohibits more than 20 percent of land to be public in each county. The bill also reduces funding for the Department of Natural Resources’ land-acquisition and property-development program by $2.5 million.

Due to that reduction, the proposed annual funding for the program of $31 million is 7 percent less than the current level of $33.25 million. The bill would also change the funding structure of the program by providing $10 million in cash through the forestry fund, leaving $21 million to debt.

The bill’s other co-author, Rep. Amy Loudenbeck, said in a memo accompanying the bill that this change “helps trim back the amount of bonding and future debt dramatically, without compromising the goals of the stewardship program.”