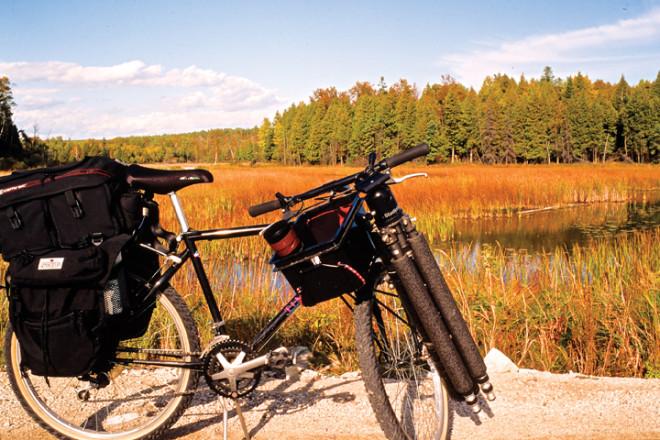 He can be seen routinely in the county – following a parade, attending a festival, at a concert, at a dedication ceremony; although, most often he cannot be seen wandering and waiting in the county’s parks and on shorelines before the rest of the county rises.

All the while he is photographing. While we may or may not see him, Len Villano sees everything our county offers and captures images few people can – most recently as the photography director of the Peninsula Pulse and Door County Living.

There are, and have always been, two constants in Villano’s life:  photography and Door County. Luckily for all admirers of his work, he found a way to bring these two together, but the route to becoming one of Door County’s favorite photographers was circuitous and filled with other possibilities. 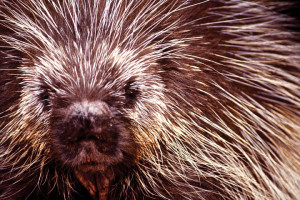 Like countless others who wind up in Door County, Villano was raised in Chicago, in a family of three boys and three girls. “The three boys are all artists, and the three girls all have ‘good’ jobs,” said Villano of himself and his siblings.

Villano was introduced to cameras at a young age. “I started photographing when I was a little kid because my dad was into it. My mom bought me a developing camera kit when I was seven. It had a little plastic camera and a little contact printer – that’s how I got started,” explains Villano. “Growing up I never thought of it as a career, it was just something to do. I converted the bathroom at home into the darkroom, and, in sixth or seventh grade, I converted a janitor’s closet at school into a darkroom.”

Architecture captured Villano’s attention as a wise career path while he attended Morton East, a vocational high school. He took courses in drafting, mechanical drafting, architectural rendering and model building and when he graduated he already had a technical college degree.

He followed high school by going to college for architecture and was able to use the photography skills he’d been developing since he was seven years old to good use in many of his college projects.

While in college another of Villano’s childhood hobbies was rekindled – his natural talent for music. He explains, “In grade school I took piano lessons from a nun. I went through all four years of lesson books in one year. My teacher called my parents in and wanted my parents to buy me a piano. My dad said that he’d buy a cheap one and the teacher threw a fit because she didn’t want me to learn bad tone.”

He gave up playing piano in the fifth grade, but in college Villano started taking music classes again. “I performed the first ever synthesizer solo performance in a recital at the University of Illinois – Chicago. It was an original song, ‘The Soldier’s Kiss.’” 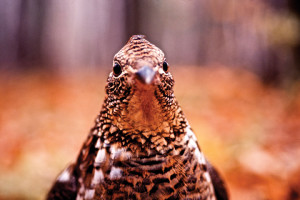 Getting back to music in college started a trajectory that would lead him to being in a number of bands, often with his two brothers. Villano played the keyboard, organ, piano and synthesizer for his bands.

“The very first band I was in was an Elvis impersonator band,” said Villano. Eventually that band morphed into an Elvis/country band. “The Elvis band was on first and the band members changed clothes for the second set as the country band.” These bands performed mostly cover tunes.

“As it got to be me and my brothers’ original band, we played the college circuit in Wisconsin, Illinois, Michigan, and a lot in Indiana,” said Villano. “We played straight rock and roll, original songs. As we hired different guitarists and drummers, the band would go in different directions from classic rock and roll to heavy metal.”

There was a period in Villano’s music career – the 1980s, obviously – when he and his band mates would dress up in spandex with big hair. “Then we revolted against that and grew beards, wore jeans and flannel. That was the start of the grunge movement in Seattle and we were doing that in Chicago.”

The names of Villano’s bands were as varied as their music, fashion and hairstyles:  Conttrol, Pegasus, Onyx (“This one had a girl frontman, and we recorded albums that were released in Germany”), On All IV (“it’s Villano spelled backwards, but people called us the IVs”), and 2 Crow.

Villano was fast to point out that the original songs they performed with these bands were not love songs. Villano wrote the music and his brother Steve wrote the lyrics. “Our music was all socially based. They had some meaning behind them…they dealt with social issues, the environment…”

After Villano graduated college and was working in an architectural firm by day, he was playing in the bands by night. His long hair, which he still sports today in a ponytail, was good for the band, but did not jibe with his bosses at the architectural firm. Villano said at work he had to put it in a ponytail and stick it in his shirt. When night came around, he’d take his hair down to perform. Villano said at least he could say, “At night I really do let my hair down.” 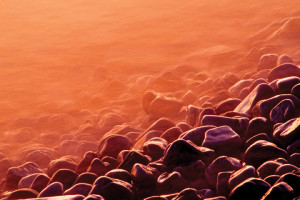 Villano made the decision to leave architecture shortly thereafter, and moved to Door County in 1994. The move was pivotal in his photography career, but it came at the loss of his bands. “When I moved up here it was kind of the end,” said Villano. “The intent was we stay together and I would travel back and forth. We tried for a while, but it just didn’t work.”

Yet, when he moved to the county it became the center of his life.

Villano was always attached to the county even before his permanent move. He was first introduced by way of camping. “We’ve been coming here ever since I was a little kid. We always really liked it. And when I was older I came up here to write songs, and went back home. I always loved it here,” said Villano.

“I love to camp and still try to go every year to the same campsite I’ve been camping at for 40 years. That was one of the reasons for moving here – Peninsula State Park. It’s still my favorite place to photograph. When we were younger I took pictures of trees and rocks, and my family would always ask, ‘Where are we at?’ There were no people, no brothers or sisters in any of the pictures.”

Villano estimates he has now taken approximately a million pictures in Door County. In the first year after he moved to the county, Villano reckons he shot 30,000 pictures – “I’m not a ‘run and gun’ type of shooter like some photographers. They’re all different photos.”

Though Villano could have stayed in Chicago, remained an architect and played in a band, he followed his photographer’s instinct to Door County and made a career out of what he once called, “just something to do.” 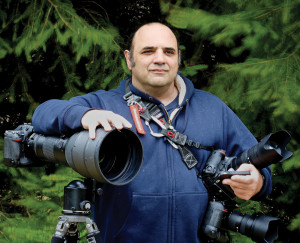 As a photographer, Len Villano’s day is determined by light.

“My typical day changes a little each day,” he explains. “I’m up at 3:00 in the morning so I can be out of the house before the sun comes up. If you wait till the sun rises you lose a lot of the good light. I shoot until about 10:00 in the morning, after that the sun is too high.

Villano’s lesson is:  it’s always prettier to shoot before and after sunset. “There’s still a lot of photos to be taken after the sun is gone,” says Villano, addressing a misconception that all light is lost after sunset.

Atypical hours are necessary if photographers hope to catch the images Villano has. He says sometimes it’s luck, but it also takes a great deal of patience, especially when photographing wildlife.

“I have an idea of where they are and follow the animal around for a couple of hours,” explains Villano. “I don’t have a big telephoto lens that would frighten them, so I can get closer to the animals.”

Some of his animal subjects even become friendly with Villano. “I’ve had a skunk pretty much at my feet, but skunks scare me because you don’t know what they’re going to do. A porcupine was really friendly and sat in my lap. A grouse sat in my lap, too; when I went back to my car to get more film, it followed me and jumped in my car.”

Villano says some of his favorite subjects are a couple of old trees in Door County that he repeatedly shoots. He says, “They get the feeling of old friends, because I keep going back.”

The manner of finding a subject hasn’t changed, but technology has changed at a blinding pace since Villano began shooting. “I had to reinvent myself a couple times because of changing technology,” explains Villano. “When I started cameras didn’t have autofocus yet; I shot nothing but Kodachrome ASA 25. Cameras today can have ASA 400,000 (you could shoot in almost darkness).”

The other change in technology relates to the switch from film to digital. “There’s a lot of advantages to digital, but I miss film as well. When I shot slides that was the image right out of the camera. It was nice to see the original film and to say it’s not photoshopped.”