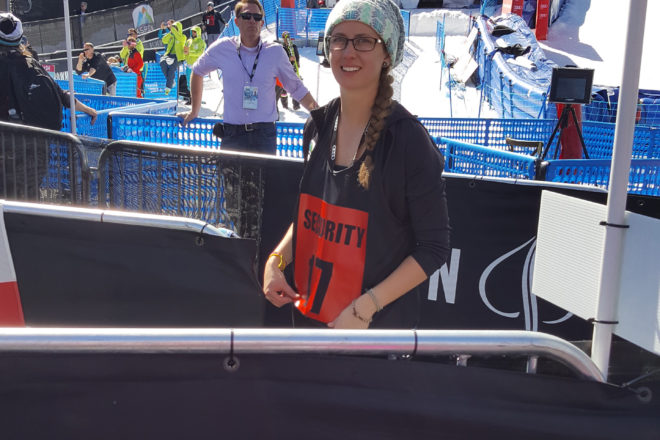 This is the epitome of alpine ski racing, where competitors compete in these disciplines: Downhill, Super G, Slalom, Giant Slalom and Team Slalom. For most, watching it on television is the norm. For some, attending the event as a spectator is possible. For a mother-daughter duo from Ephraim, being a part of the operations of the Alpine Ski Racing World Cup finals became a reality.

As alpine ski enthusiasts, my daughter Sophie and I were planning a ski trip out west for Sophie’s spring break. We have friends in Aspen, so put out the feelers for affordable lodging. One of the conversations revealed that one of our friends was offering up a spare bedroom to a volunteer for the Alpine Ski Racing World Cup that was coming to town March 12-19.

I was intrigued and went to the website dedicated to the upcoming event. Looking at the volunteer opportunities, we applied, were accepted, given a housing host and offered a variety of jobs from which to choose.

Sophie is a senior at the University of Wisconsin-La Crosse, double majoring in international business with an emphasis on sustainable business practices and economics. She has a minor in Spanish. Because of her interest in sustainable business practices, the “Green Team” held some interest. We signed up for two days of that as well as three shifts of on-mountain security. If visions of “mall cop” pop into your mind, it’s OK. Security was a small, yet important job, which occurred right at the finish area, next to the best alpine skiing racers in the world.

Organizing and making the World Cup Racing Finals a reality was obviously the work of many professional event planners and a large crew. The very structures that had to be built along the base of the course were akin to that of the framework of tall metal building bones. The staff headquarters was a maze of metal scaffolding, reaching from the base of the street level to that of the chairlift at Aspen Mountain’s 1A lift. Climbing the half-dozen switchback stairs was, at first, a major challenge to this flatlander, but after several days at an altitude of 7,000 feet above sea level proved conquerable.

The finish area at the base of the 1A lift was a grand spectacle. The press boxes, span of bleachers, automobile-sized jumbotron, miles of fencing, staging for the medal awards and pathways up to the finish area was the size of a coliseum. But it was all built for this event, on this mountain.

The World Cup Downhill at Aspen is an entity of its own. I stood at the base of what is called the “airplane turn” (where Lindsey Vonn crashed in the Super-G at this event) and marveled at the vastness of it. That turn alone, which occurs after the skier has gained major speed from Ruthie’s Run and the 60-degree pitch of Aztec, is the size of a professional football field. Just skidding over the ruts left by the world’s best skiers is a challenge and test of one’s skiing ability.

After the “airplane turn,” the skier flies over what is known as “the Berlin Wall.” The wall is there to hold up the steep pitch, to prevent erosion. It is not seen by the skier, but is visible to the spectators below. It appears to be a concrete and railroad tie wall that must have been quite an engineering feat to install. The pitch that follows the wall holds a 45-degree turn into the finish area. With speeds up to 120 miles-per-hour, the finish area is the size of yet another arena. After skidding to a stop there, they catch their breath and take in the applause of the fans, camera lenses flashing, and the jumbo-tron blasting their name.

Another pre-event detail was securing not only the paid personnel to enable the race to happen, but also the volunteers who would fill the personnel needs. That is where my daughter and myself secured this opportunity. We made our own transportation plans, but were set up in the most wonderful home in Snowmass Village, owned by a wonderful couple who welcomed us as though we were their own family. And I must say, those comfortable beds were well used, as the early morning hours and exciting jobs made for two tired volunteers!

Meals were also provided to all volunteers, catered by a professional crew, dedicated to organic and fresh food, which were delicious and voraciously consumed. The Aspen/Snowmass Skiing Company went the extra distance and invested in compostable plates, cups and silverware. Bins with proper signage to note “compostable,” “recyclable” and “garbage” were placed strategically, and manned by the “green team,” ensuring proper disposal.

Contamination of compostables and recyclables is always a threat, and one we feared was bound to happen. However, upon meeting “Tiehack Terry,” the local “green” caretaker, we were comforted with the information that each and every bag is raked through and sorted. This sort of dedication to the environment comes at a price for the Skiing Company, and goes well above this effort. The Aspen/Snowmass Skiing Company is dedicated to improving the environment while still making a place to ski, view, and play.

We met so many interesting people at this event. Not just the racers themselves, who hailed from France, Germany, Italy, Norway, Sweden, USA, Canada, Switzerland and Slovakia. They were all so friendly, appreciative and fit. We spoke with many of them and realized as our favorite, Lindsey Vonn, toted her own gear up to the finish area, that they were just people, like us. Vonn smiled and gave as many interviews as the reporters requested. She had just crossed the finish line in second place in the Downhill event and took the time to talk to her fans, including us, with grace and enthusiasm.

We met three men from Nub’s Nob, Mich., who knew the names of nearly all the racers. Racing enthusiasts themselves, they acquired autographs and memories that we enjoyed observing. We met a group from Beaver Creek, who call themselves the “Birds of Prey,” after the downhill run that they work on each season. Watching men carrying drills and other big course-work tools on skis is one thing, but when these women fly by with them, it is an inspiring sight for sure. We met another Wisconsin student volunteering during her spring break and several women who knew little about skiing, but were happy to be a part of this event. The staff of the event was wonderful, helpful and probably over-worked, but this short week was surely worth the long hours.

Did I mention the uniforms we were given? Upon registering as a volunteer for the week, and with a credit card deposit to ensure we would fulfill our obligation, we were given outdoor wear from sponsor Helly Hansen. This consisted of one base layer zip-up, one down-filled jacket and one wind shell hoodie, all jackets complete with the “Aspen Audi FIS Ski World Cup Finals 2017” logo. Volunteers also received an official cap and t-shirt. Thank you, Helly Hansen!

All in all, this was an experience this mother-daughter team will never forget. In the words of one of the volunteers – heavy course gear hoisted on his shoulders and a huge smile on his face – “It just doesn’t get any better than this.”