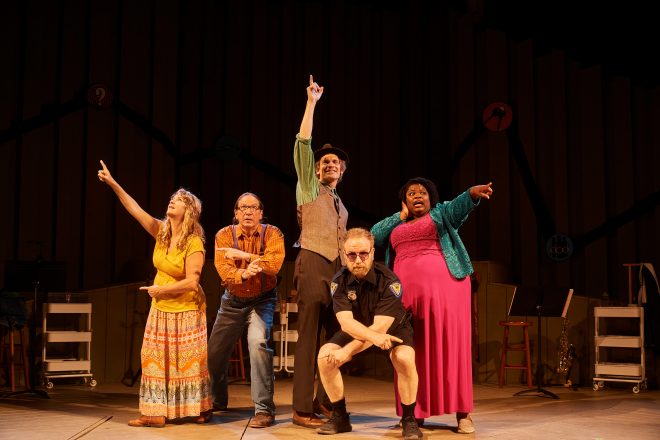 A Small-Town Mystery Comes to Life

It’s a classic case of whodunnit. Or maybe “whoknowsit” is more appropriate in the the case of Northern Sky Theater’s newest work, Whatever Happened to Karl Janko? Now playing at the outdoor amphitheater inside Peninsula State Park, the musical comedy/mystery written by Matt Zembrowski is one of three original works created by the Northern Sky company during the pandemic shutdown.

The plot focuses on high school football star Karl Janko, who was last seen 30 years ago in his metallic-green Cutlass Supreme before disappearing from his tiny hometown of Littleton, Wisconsin, without a trace. Everyone in town has their own theory of what happened to Karl, and they’re sure to make those theories known when the investigative television show Unsolved Musicals comes to interview them about their local lore. The problem is, all of their speculations are wrong – or are they?

Part of the delight in this production is watching the cast of five actors bring to life an entire town of quirky characters that resonate with anyone who has ever called a small town home.

As the show unfolds, we also meet several of the other townies: Gertie Gerkin (Mal), Irma Herman (Grandberry), Lenny Chesniak (Heide) and Officer Rick Zepnick (Mancheski), all played by the five people in the cast, who morph themselves into the various roles through the switch of hat, or the addition of a jacket or the use of just a prop or two.

The set is minimal as well. The backdrop consists only of a timeline that zig-zags across the back of the stage, the milestones marked with symbols that represent the invisible protagonist, such as a football, a question mark and a car.

But that’s part of the fun of this musical mystery tour. As an audience member, you must use your imagination to create the town and fill in the spaces deliberately created through the minimalistic approach set forth by the lack of set, props and cast. This approach also pushes the actors – who clearly are not only up for the challenge, but also easily accomplish it – as they physically and vocally create nuances for each of their multiple characters.

Brenda, for example, wears a trendy blue blazer over her bright-pink dress. But as she sheds the blazer, covers her perfectly coiffed hair with a shower cap, carefully balances a pair of glasses on her nose and hunches over a cane, that bright-pink dress becomes a nightgown, and we know that Irma has entered the room.

In a world where so much is not left to the imagination, it’s a treat to have nearly 90 minutes during which to suspend reality, lose ourselves in the story, fill in the gaps, create our own depictions of the place and people presented on stage, and maybe even see our own hometown in the portrayal.