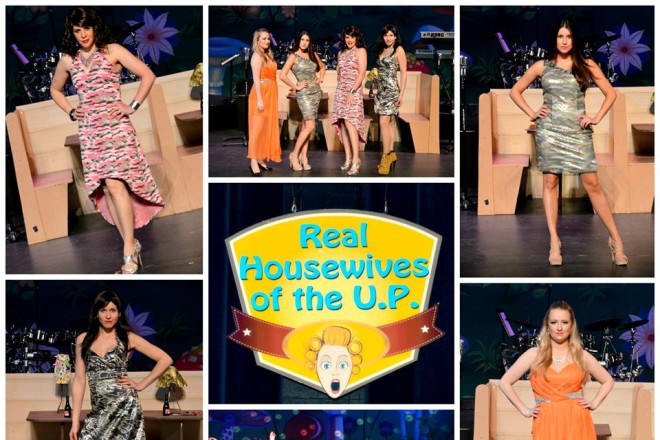 Michigan’s Upper Peninsula, and the yoopers who inhabit it, will be highlighted in all their glory during Let Me Be Frank Productions’ musical comedy The Real Housewives of the U.P., showing at the Southern Door Community Auditorium, Nov. 21 & 22.

The comedy musical begins on The Real Housewives of the U.P.’s set, where the producer and host are in desperate need to replace two of the reality show’s main characters who are on maternity leave, both of them impregnated by the same man (one of the show’s former cameramen). They bring in two women, Emily Carnegie and Cassidy Rockefeller, to audition in hopes of joining original cast members Amy Digeri and Kasey Goofygan.

“Emily is the wide-eyed, bushy tailed, innocent girl who is not really understanding what’s going on. She’s just kind of along for the ride,” said Kasey Corrado, who plays exotic dancer Kasey Goofygan. “Then there is a woman named Cassidy who plays a more manly character, so she’s the complete opposite of the super girly, glitzy diva that I am.”

While the two main cast members, Amy and Kasey, maintain a united front in their “bow down to me,” experienced cast member way, turmoil is bubbling under the surface – a result of Kasey giving Amy’s husband a lap dance at the local gentlemen’s club.

In the meantime, Amy organizes a benefit to save the threatened humongous fungus among them. The women dress up in their best camouflage dresses and Timberland high heels, and bring a dish to pass, along with a few 30-packs of Busch Light. There is just one problem – Emily has made a dish of mushroom caps from the humongous fungus that they are trying to save.

As Let Me Be Frank Productions says, “More than a few slaps and scratches occur.” Nearly 20 songs, from Creedence Clearwater Revival to Michael Jackson and Olivia Newton-John, accompany this comical twist on reality TV in the upper Midwest.

“You think ‘housewives’ and you think of these super uppity, wealthy women who have nothing better to do than talk about each other behind their backs. Then you have this other side where you think U.P., people who are running mom-and-pop shops and go hunting and fishing on the weekends,” Kasey said. “When you combine the two, it’s really funny to see how it ends up working and how it happens.”