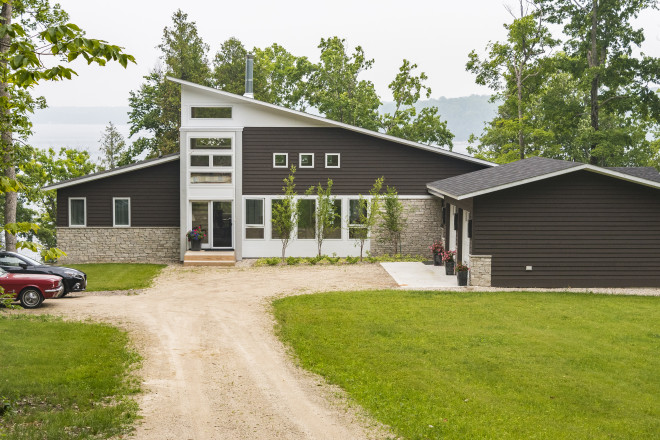 On a continuum scale with “A Step Back in Time” at one end and “Cutting Edge” at the other, Washington Island’s indicator arrow falls decidedly toward the anachronistic (if you haven’t been fortunate enough to visit, think screen doors and rolling stops and baseball games on Sunday afternoons). 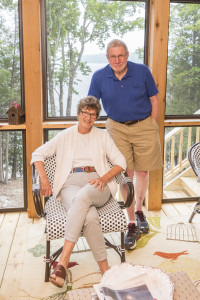 When Lucia and Pete Petrie hired architect Michael Kickbush of M.G. Kickbush Design & Consulting LLC to design a new home for them, they nudged the indicator arrow a bit closer to “Cutting Edge.”

In 2013, the Petries decided to sell their home on the east side of Washington Island and purchase a lot next to their oldest son and his family on the north side.

“Family is really important to us. We wanted to be close to our kids and grandkids here on the island and to have space for other family to visit. The houses we’ve owned throughout our lives have worked because they’ve accommodated our family at various stages. We wanted to build this one with the next stage in mind.” Kickbush toured two of the Petries’ previous homes and talked with them about what they liked, what they’d change and some ideas they may not have given much thought to when they were younger. He then set about designing what’s called, in gerontological jargon, an “aging in place” or “barrier free” home.

According to the Gerontological Society of America, “aging in place” homes “emphasize the interaction between personal competence and the physical home environment…showing how changes at home (such as removing obstacles or introducing mobility aids) can enhance independence.” Kickbush explains that while “aging in place” homes are considered fairly progressive now, they’re becoming increasingly popular. He predicts that in the future, as our population ages, “barrier free” elements will become more standard. 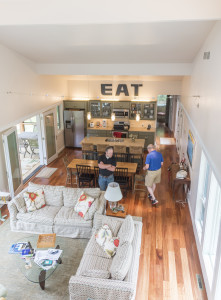 Perched on a bluff overlooking Washington Harbor, the home Kickbush designed for the Petries is outfitted with a number of barrier-free elements—remote-control windows, non-slip porcelain floors, wide doorways with handles rather than knobs, a raised garden and spectacular lighting. (Lucia: “We older people need lots of light!”) Stairs down to the water and up to a loft add to the aesthetics and experience of the home, but are not essential for living in the home. The main living areas, master bedroom and bathrooms are all on one floor. Surprisingly, unless you know that the “aging in place” features are there, you don’t notice them; kind of like a hidden objects – until you’re told to look for the hammer or toothbrush or nail, you don’t see them.

What you do notice when you walk into the Petrie’s home are its clean lines, the light pouring in from lofty windows, and how the rich wood, weathered stone and artwork stand out so beautifully against the white walls. And, because the house is essentially one room wide, you notice the spectacular views accessible from everywhere. For a house designed to be practical, it feels anything but.

This doesn’t happen by accident. Kickbush paraphrases the Roman architect Vitruvius in explaining that utility is only one part of good design. “It’s like a three-legged stool. It must have firmness (strength), commodity (utility) and delight.” 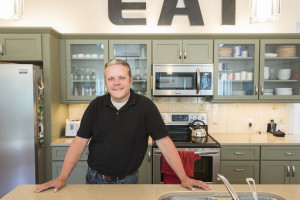 Architect Michael Kickbush was tasked with designing an “aging in place” home for Lucia and Pete Petrie on Washington Island. Photo by Len Villano.

Lucia’s commitment to delight is apparent throughout the relatively small house; its 1,800-square-feet are chock full of delightful features. A cozy, cantilevered screened-in deck opens directly off of the kitchen and looks over the water and the string of stairs that lead down to it. Lucia explains, “It’s our favorite room in the house and when our daughter-in-law visits from Milwaukee, it’s her yoga room.”

Pete’s office is another delightful feature. More of an alcove than a room, it shares the same tree-lined view as the porch (how he gets any work done is a mystery!) Above the office, a loft flanks one end of the house and provides sleeping quarters for guests. Lucia notes, “It’s a hit with our grandkids and anyone wanting an afternoon nap.”

Kickbush has worked on a number of award-winning projects throughout his career and first used “barrier free” elements in commercial construction. He finds inspiration in the works of Mexican Modernist Luis Barragلn and American engineer and visionary Buckminster Fuller. Whatever his source of inspiration for the home, the Petries couldn’t be more pleased with the outcome.

“This is the third house we’ve owned on the island and the second one we built. This is our favorite.” When asked what’s surprised her about the new house, Lucia says, “It’s just so easy to live in. I wasn’t expecting that.” 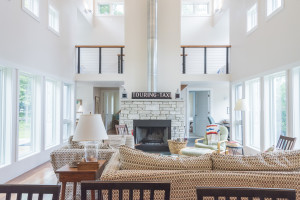 The main room is drenched in natural light. Photo by Len Villano.

“When people think about building a home for their later years, most stop at adding an attached garage. With a little more thought and the help of a designer, you can incorporate attractive features that might save you a year or two of residency later. Alternatives to living in your own home are usually much more expensive, so the payback of that extra year or two is huge. And you get to stay in your own home, which most people prefer.”

In addition to its design, the Petrie’s home is progressive in another sort of “back to the future” way. All of the elbow grease and knowledge that went into creating the home came, intentionally, from the island. Kickbush, a transplant from Milwaukee, now lives on the island year-round with his wife and young daughter. (She attends second grade as one of the 75 or so students in the K – 12 island school.) Jim Gunnlaugsson, the home’s builder, is a native islander. He and a crew of three worked with sub-contractors and suppliers who live on the island or, in the case of the heating and cooling provider, had close ties to the island.

“The only exception was the electrician. There’s only one on the island and he was swamped,” explained Kickbush. 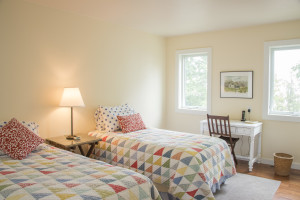 Kickbush and the Petries stress the benefits of working with locals. Pete states that island bids were “competitive” and Lucia credits a local purveyor with knowing about a deal that saved them 40 percent on windows. Kickbush adds, “There’s an efficiency when you work with people who know one another, know the zoning, the land, the suppliers. There’s an amazing talent pool here on the island and in Door County in general. People don’t need to bring designers and contractors from bigger cities to get a creative, exceptional product.”

There are also intangible benefits such as a strong work ethic and a familiarity with the harsh climate. Work on the home began in December of 2014 and the Petries moved in that June. Kickbush recounts days when the wind whipped off the lake and temperatures fell to 10 to 15 degrees below zero and still the crews showed up. He shakes his head. “No one expected them to be here. I guess it’s their Scandinavian blood!”

The light pouring into the Petries’ new home illuminates more than its beautiful design and interesting art; it illuminates a couple happily ensconced in a home they’ve created and will enjoy for years to come. Lucia looks around and states with certainty, “There isn’t anything I’d change.” 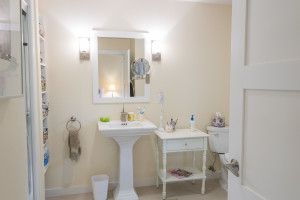 Lucia and Pete Petrie worked and raised their children and still live part-time in the Milwaukee area. They began visiting Washington Island in the late 1960s. They are now, along with more than a dozen other families, part owners of the Washington Island Observer, Washington Island’s award-winning local newspaper.

Michael Kickbush is the Principal at M.G. Kickbush Design and Consulting LLC and may be reached at [email protected]