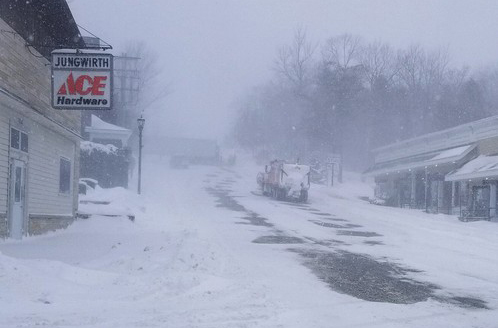 Traffic was stopped on the Sister Bay hill around noon Monday when a semi driver apparently attempted to turn onto Hwy 57 in the middle of the hill at the Hwy 42/57 intersection. The truck jackknifed on the hill. Photo by Cole Vanderleest.

The Town of Liberty Grove announced that town roads won’t be plowed until Tuesday morning due to poor visibility. The town is urging residents to stay off the roads if possible.

A winter storm is dumping 8 – 12 inches of snow in parts of Door County Monday, with high winds creating tall drifts on roadways. All county schools and many other services were closed Monday.

In Sister Bay, Hwy 42 was blocked at the 42/57 intersection when a northbound truck driver apparently attempted to turn south onto Hwy 57 in the middle of the hill and jackknifed his truck.

Door County Administrator Ken Pabich said those with appointments at the government center should call ahead, as many offices are closed or working with minimal staff Monday.