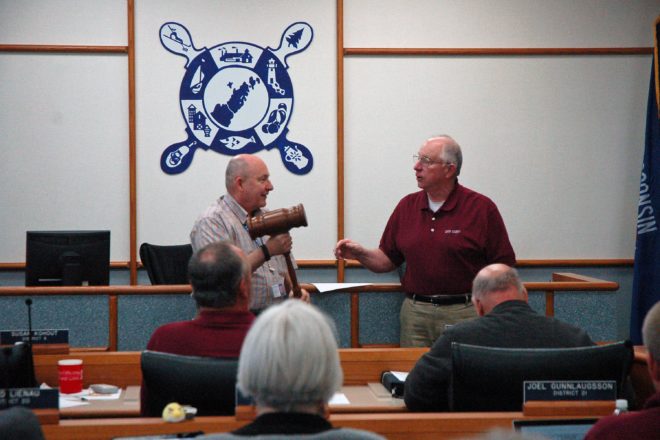 The Door County Board of Supervisors went through its post-election orientation and reorganization at its April 19 meeting, with Supervisor David Lienau being voted in by his colleagues as the new board chair, replacing Dan Austad who had served the past four years as chair.

“I want to thank everybody for the last four years. It’s been an honor,” Austad said before presenting Lienau with a giant gavel.

“It’s an honor for me to have this position,” said Lienau, who also serves as village president in Sister Bay. “It will be a real privilege to work with you the next two years. Thank you very much.”

The supervisors then named Supervisors Ken Fisher and Susan Kohout to be considered for the position of vice chair. Fisher received the majority vote.

“I really do appreciate it and it does mean a lot to me,” Fisher told his colleagues.

Supervisor John Neinas then suggested a new rule for the board – supervisors should turn off their cell phones at meetings or be charged $25 for the Door County United Way.

“Maybe we can carry on our meetings without interruptions,” Neinas said.

Corporation Counsel Grant Thomas said there would not really be a way to enforce the self-imposed fine, which prompted one of the supervisors to say to Lienau, “Crush the phone with your new gavel.”

“Ten, 12 years now on the board and I’ve never heard one go off at a county board meeting. It certainly isn’t an issue here,” he said.

Yet, the measure passed.

The board also voted in members of the Highway Committee, which consists of a representative from the south, Sturgeon Bay and north, plus two at-large members. Washington Island Supervisor Joel Gunnlaugsson was chosen to represent northern Door. Supervisors Neinas and Roy Englebert faced off in a vote to represent southern Door, with Neinas winning the majority. Neinas was also unanimously chosen chair of the committee. Supervisors Haines, Kathy Schultz, Ken Fisher and newly elected Supervisor Megan Lundahl were eligible to represent the city; Fisher won the majority vote. Roy Englebert won the vote for at-large No. 1 and Dan Austad won the vote for at-large No. 2. 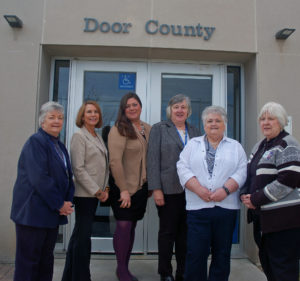