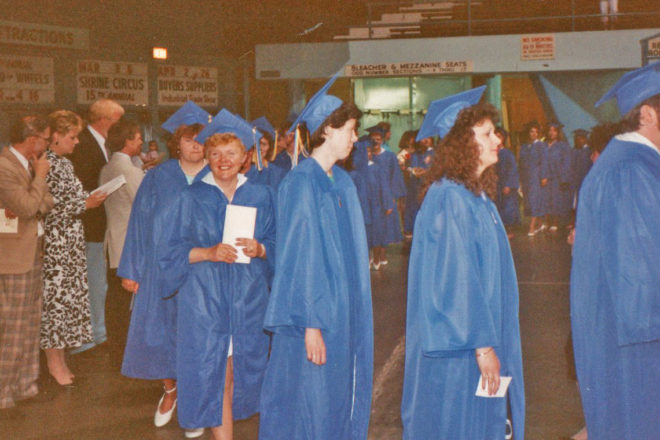 I came across the photo at the bottom of an old cardboard Leinenkugel’s box, a remarkably sturdy box that has held most of my photos as I bounced from apartment to apartment for the last 13 years.

Late on a Saturday night a few weeks ago I was packing up to move again, trying to thin my pack-rat collection once more before loading my car. Invariably when I do this, I’ll come across something that stops me, something that reminds me of a moment or experience I haven’t thought of in years.

The photo I held was of my mom on her college graduation day, age 45, draped in a blue cap and gown as she entered the floor of Green Bay’s Brown County Arena. After a 25-year hiatus that included giving birth to six kids and a family bankruptcy, she had finally finished nursing school.

As nine year-old me watched her enter the arena, I didn’t appreciate what an accomplishment that moment was for her. I wasn’t yet wise enough to recognize that this was unorthodox or what persistence it had taken to get to that moment, to charge through all of the false finish lines placed along life’s road.

The picture took me back there.

Back to when my mom decided waitressing and odd jobs weren’t enough anymore. That even with six kids crammed on top of each other in a tiny house that was in a perpetual state of rehabilitation, she was going to go back to school and finish what she started at Loyola University in Chicago so many years before, in what must have seemed like another lifetime – maybe another life altogether.

She would commute to Northeast Wisconsin Technical College in Green Bay, back in the days of the two-lane highway when the drive from Egg Harbor took a solid hour and a half or more. She made the drive in old cars of dubious reliability, through winter snow and ice, through the high school years of her three oldest daughters. Dad worked multiple jobs and was making his way toward a real estate license, so my older sisters acted much as parents to my older brother, little sister, and me while mom commuted to school.

I think back to that time, and I remember the occasional argument about money; but, I can’t remember my parents ever blaming anyone for their predicament. Somehow they had ended up here, and somehow, some way, they would get to the next day, move forward.

We started a garden. Raised goats, chickens, ducks, sheep and any other animal we could squeeze into two acres and the glorified storage shed we called a barn. 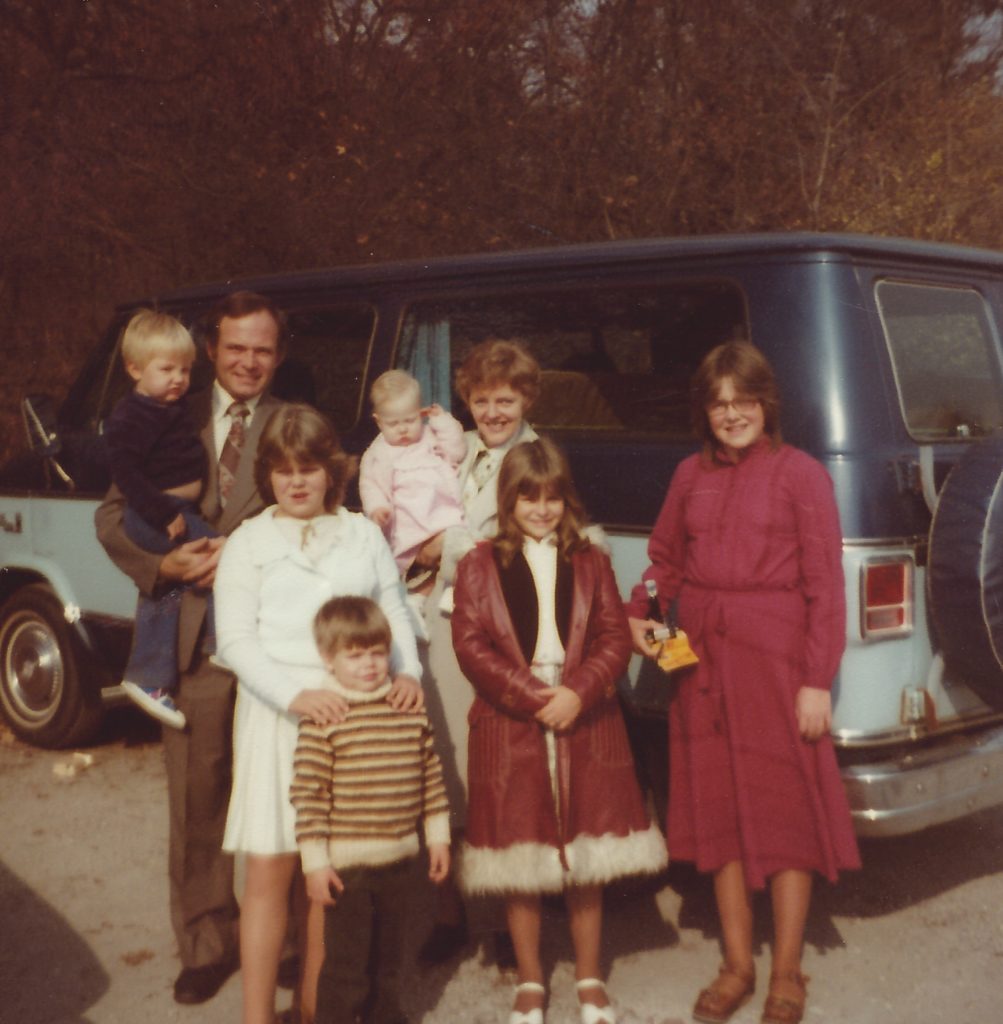 Each day, my mom would drag herself out of bed, drive to school, then work the late night shift at the Country Kitchen, as a fill-in janitor at Gibraltar School, or wherever she could find a shift that fit into her school schedule.

Her matriculation to graduation day didn’t fit the educational mold that we like to squeeze our kids into. The mold that says you have to have college-caliber grades by 17 or you’re doomed. That 18 is some magical age that decides the rest of your life and not just some arbitrary number. That mistakes are fatal.

Tomorrow my older brother will finally don a college cap and gown at the University of Wisconsin – Madison. He’ll walk at age 34, graduating from the third college he has attended, in his third state, in his fourth stint. In the years between his start at Purdue 16 years ago and his walk across the stage, he opened six businesses, declared bankruptcy, dabbled with the guitar, worked jobs in construction, kitchens, and at a tiny Egg Harbor engineering company. He lost 100 pounds, gained it back, lost it again, gained it back, and lost it again.

Tomorrow, he’ll carry an electrical engineering degree home with him. He didn’t take the shortest path from point A to point B, but apparently that’s an inherited instinct. In hindsight, that straight path seems pretty dull anyway. 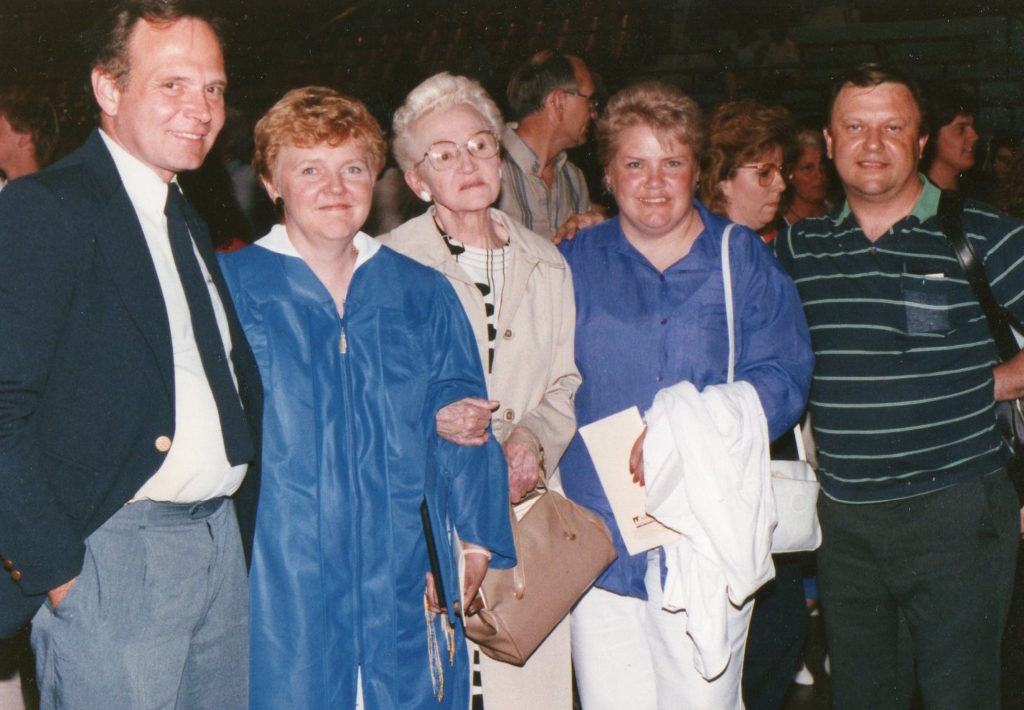 I think of his path, and my mom’s, and I think of the high school students who will graduate in just a couple more weeks. I hope, in spite of all the hype we flood them with about life’s supposed deadlines as they grow up, that a few of them can realize that age 18, age 21, graduation day and most of life’s other road marks are arbitrary. That there is no “normal” and you make your own path, at your own pace, and there will be plenty of mistakes along the way.

The secret few want to share is that life will give you a chance to recover from almost all of those mistakes, you just have to allow each one to teach you something and avoid the ones from which you can’t recover.

This all hit me as I looked at that picture of my mom again, a week before Mother’s Day, beaming beneath her red hair and blue graduation cap. I didn’t know what that cap and gown meant back then. To a nine-year-old it was just an event, a reason to go to “the big city” and a big arena.

I realize now what it was – an invaluable lesson.